Stanley and me continue to be very busy.  The other day we started working on one of the bird feeders in the yard.  We thought it ruined the ambiance so we figured we'd better take it down.  We haven't gotten it down yet but we are working on it.  We also have removed many bushes and flowers.  We are totally remodeling. 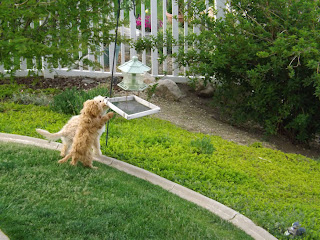 Stanley posted a picture the other day of him hiding in the toy box.  I decided that was a good place to hide so I decided to do it too.  Can you see me? 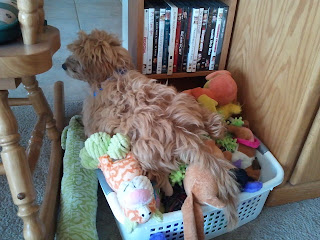 Our peeps surprised us today and took us to a place they called "groomers".  I don't think they felt too bad because they just handed us over to strangers and left!  We were scared but thought the ladies were nice.  That is until they started making us have a bath!  Stanley was laughing at me until it was his turn.  And the other thing they did was trim up our face hair.  I can see out of my eyes again!  I'm embarrassed to say they used the same noise machine and trimmed up our butts too.  I hope that never happens again!  Mom thinks I look real handsome.  I even wore the scarf until we got home and Stanley started using it to drag me around.  I finally weigh 10 pounds 3 ounces but Stanley is much fatter bigger at 17.6 pounds.  I have to agree, I do look handsome. 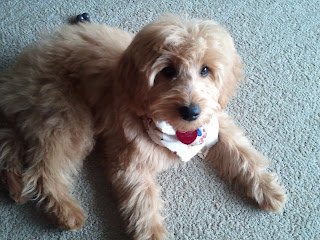 Here's my side view so you can admire the total effect.  Mom said my fur is silky soft.  Stanley is more woolly and poodle-ish.  Can you see my muscles? 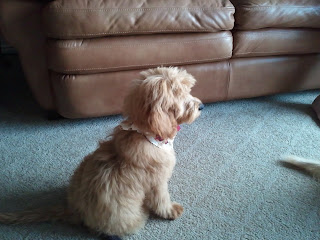 In case you didn't notice, my paws are nice and even now instead of scraggly looking.  It never bothered me but mom seems impressed.  I don't know what difference it makes when I get in the mud anyway. 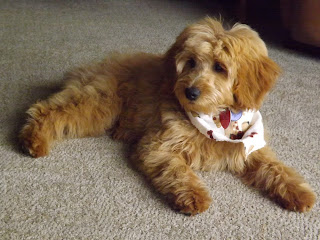 The biggest surprise was what Stanley looked like when he was done being groomed.  Our peeps were shocked!  All his woolly hair was fluffed up and the groomers said he looked like a cloud.  I took one look at him and I knew he looked like a disco king from the 80's!  He had a big ol' afro!  This picture doesn't even capture the effect. 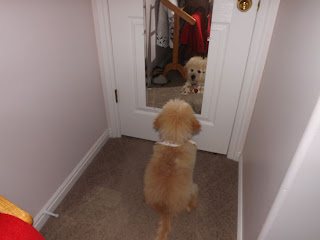 I have to admit, he is good looking.  I mean, we share DNA so why shouldn't he?  Mom said the fluff out makes him look softer and more puppy-like.  Stan says he looks more studly! 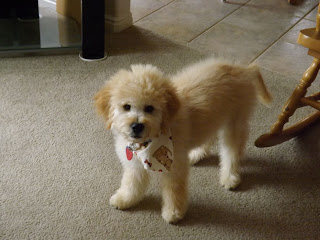 When mom and dad heard Stanley call himself studly they said, "Oh boys, we have another appointment for you on June 5th."  But we aren't sure what it is because it was a word we didn't learn yet.  Anybody know what "neuter" means?

You two are just so handsome with your new hairdos!! Don't worry about the 5th...snip,snip and it's over :)

LOL Oh you two are just adorable!! You look super snazzi with your new haircuts!! Very impressive. And what?? You dont have that bird thingy down yet?? bol

I have a feeling you wont like the neuter bit, i'm just sayin.....

You two look fantastic. I had to laugh at the '80s reference.

Ummmmmm we pawfer to call THAT Appointment.. a TUTORING... I'm just sayin. And Jazzi is pretty much Right. Tutoring is NOT somethingy that you will care much fur... esp. if you have to wear the CONES of SHAME afterwards.

HEY... Ernie used to have pretend furends in the Mirrors and in the DISH LICKER thingy... BUTT he has given up his pretend furend now... enjoy it while he has it!!!

I thing BOTH of you look SOOOOOO handsome after your Groomer time.

Don't you two look dapper! Looks like Stanley has a bit of an ego there! LOL!

You are both looking SO ADORABLE! Going to the groomers is no fun - hope you got some yummy treats for pain and suffering at the groomers.

You guys definitely look good and are getting so big. I would tell your Mom and Dad to help you out a little with the upcoming appt. by buying you an inflatable neck collar, it's no where near as embarrassing and pain in the butt as the cone of shame. It's like a little neck brace and it velcro's on so if they are sitting with you they can take it off and put it on very easily. I also think you may get lucky and get to go on a few extra walks cause it sure is a pain not being able to wrestle for two weeks. Good luck

You two look GREAT! All I have to say about June 5th is.... NOOOOOOOOO. I mean it ain't no big thing, you won't notice anything happened at all.
Blessings,
Goose

Hi - I'm Stewey and I just found your blog! You two are soooo ADORABLE!!
Stewey

You guys look so cute! Did you go to the Polished Pet Parlor? Don't worry too much about your next appointment......It's much easier for you guys than it is for the ladies. (I should know......)

Oh My you two look great. I was a bit surprised with Stanly's look. I can't wait to meet you two in person tomorrow at Church.

Ummm about that other appointment. Well all I can say is...Well, I just really can't think of anything to say that wont scare the bee jee bees out of you so, Ummmmm Well

Wanna sneak away the 4th of June and stay at my place for a day or two. I bet My Vickie wouldn't even notice with all the other dogs here. Just Sayin....

You both look FAb-U-LuS!! Now the visit on the 5th will be a blurr for you, and is really a must for the studly pooch. You'll thank them...later.
Smooches from pooches,
BabyRD & HOotie

Oh my what a makeover! You two look fabulous, so handsome!