It has sure been a busy couple of days!  After our hike (it ended up being 2 miles) and escape on Tuesday, dad found the weak spot in the fence and fixed it.  So we're locked up tight once again!  Then they went to the store, and you are NOT going to believe this, bought a pool for the clubhouse!  Yup, a little blue pool.  Stanley and I have both waded in it but mostly we think it is a giant water dish.  Mom said they are going to put more water in it once we are used to it.

Yesterday, we went to the river parkway and walked a mile.  We also waded in the little spot by where the dinosaurs live.  We met a zillion people there!  There were also many dogs but most of them were not friendly so they did not stop to say hello.  But one Golden Retriever did stop to say hello and I remembered my manners and did not jump all over him.  We became new friends immediately!  As we walked back to the parking lot, a lady was driving her car and stopped, rolled down the window and told mom we were so cute she had to stop.  I suppose we are cute if we're stopping traffic!  On the way home we stopped at Petco and we got to go in the store!

Today we went back to a different spot of the parkway but we didn't meet any new people.  It was scary because so many bikers just flew past us!  Mom and dad had to be careful to make sure we were not in the way of them!  But we got to wade in the river again!  This time we went into a little spot by the stadium.  As soon as we got there we waded right into the water.  It was great fun!  We also met another new friend, he was a Irish Setter.  But we were so excited we forgot all our manners and jumped all over him.  He tolerated us well but I don't think he really wants to be our friend.  We think he was just being nice when he said it was nice to meet us.  We walked just over a mile.

After we got home, we went into the house and fell asleep.  Stanley likes to sleep around toys so he can squeak them if he wakes up. 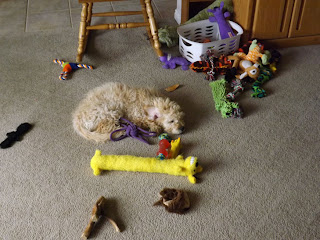 I was so tired, I just went to bed.  I am exhausted!

What a great walk! I can't believe you got to wade in the water and meet like a zillion people! You guys sure looked pooped after!

It's definitely understandable why you stop traffic, and I'm so glad the fence was fixed so you don't have anymore unsupervised outings.

Sounds like Bert might have a run for high kibble soon as far as water goes. Super happy your dad fixed the fence, wouldn't want you 2 getting hurt. Now we have a pool for the club house?! It just gets better and better.
Blessings,
Goose

Aww...you two look so cute when you are sleeping!! YAY a pool for the clubhouse. After meetings, then we can have a swim party.

Hello Stanley and Murphy - I discovered your blog on PBU and boy am I glad I did. I'll have to come back for more reading soon! Your walk sounded pawsome and, I have to say, your clubhouse looks so cool! I bet you have some great meetings in there and solve the problems of the world while you are at it!

We'll be back soon for more reading!

wow you guys must be very very cute to be able to stop traffic, that is a very special skill not even stormy has done that!!!

Kobe and the City said...

Very cute! They remind me so much of my puppy, Kobe! He's a cock-a-poo and get confused with goldendoodles all the time!

Check out my blog @ kobeandthecity.blogspot.com

Have a nice weekend!