Last night was our second day of school.  This time we went in and out of the class room practicing what we were learning.  We learned "down" (although I pretty much already knew it), a more difficult "leave it", "drop it", and a recall exercise.  But the best part was seeing my girl friend Marley!  All she wanted to do was play and I would have liked to play too but we had so much work to do there wasn't time - Rats! 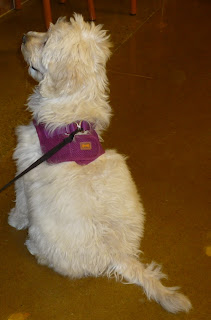 Stanley was a perfect poster dog for his behavior.  He was so well mannered that all of us are in shock! 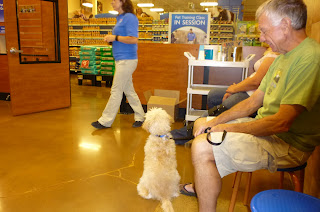 This is one of my classmates.  I call him Blackie.  He has a twin who looks just like him.  I call the other one "Blacky" (notice the spelling difference).  I haven't talked to them much, their peeps are very quiet. 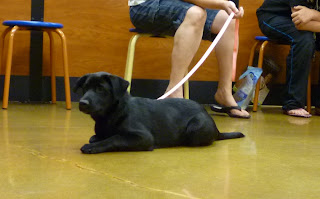 This is my friend Charlie.  His hormones were really raging this week.  He is younger than me and Stanley but he just had one thing on his mind. 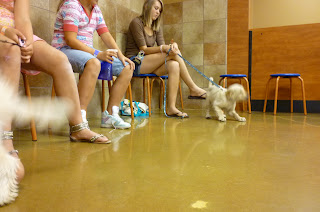 I have to tell you what happened.  When we were going into our classroom, the prior class was coming out. Several people were just standing outside the doorway.  There was a couple standing there with 2 small dogs.  As we passed them I greeted the first one, then moved on to get through the door and stopped to greet the second one.  The other dog was receptive and we sniffed noses and then out of the blue (as verified by my teacher, I did NOTHING wrong), she attacked me!  I was scared to death!  I cried for some time as I was really upset.  The dog's peeps said the dog never did such a thing before.

Now to put this in perspective, just prior to this, when we were walking around the store and practicing meeting dogs, this other dog acted negative towards me too.  Not Stanley.  He tried to hump Stanley but he wanted to eat my face.  At least everyone saw that coming and we were pulled back before anything happened.  Then the day before, Sunday, when we were going into church, I greeted another dog and she nipped my nose!  Again, there was no warning.  There are 2 other instances that my mom can recall where a dog has been negative towards me but fine with Stanley.  So this leaves me to believe there is something about me that dogs don't like.  With each of these instances I was being friendly and using my manners and not jumping or being over zealous.  So mom is very upset as she cannot figure out what to do.  But she said she is now to the point where she is concerned about my safety.  And frankly, I think I am too!

So if anyone has any suggestions, we would love to hear them.  Because we are very perplexed.  I am actually a very gentle in spirit pup and was the runt of my litter.  But there must be something about me . . .


PS - The people who appeared to be mean to their dog were not there this week so we are wondering if they dropped out.  If so we feel sorry for that pup!

Poor Murphy! We'll just have to find lots of friends who aren't mean to you! I hope you don't get a complex over this! You really are a sweet pup!

Murphy I can't imagine anyone or anypup being mean to you. You show Uncle Goose who they are and I will have a little talk with them. I will even bring my posse, Bert, Big Murphy, Annie, Boci and Logan. We will set them straight,in a non-violent way of course. We got your back dog.
Blessings,
Goose

Oh Buddy... sometimes Bigger ones see the Smallest of the pack and they just.. become BULLIES. NOT your Fault... I (Frankie Furter) have had this happen to me.

HEY... are you two taking your classes at the PetSmart University and Stuffie Distributorship??? Beclaws... your school Room looks EXACTLY like the school room Where I went fur all my Classes. My "School" was in Zanesville, OH , though.
PeeS... maybe you could talk to your TEACHER about this Bully Stuffs... and see what SHE thinks.
Bullies are BAD. They should be ashamed of themselves. RIGHT?

I think they are simply jealous of your superior awesomeness so I say boo to them :) You are so sweet. Anyone who is not nice to you is just plain mean.

Fight the Power, my sweetie pie.

Sometimes other doggies get really mean to Finn, like barking in her face and stuff. Finn is really submissive and just lets them get all in her business. Someone told me it was because I was mothering her too much!

Hey Murphy, I'm so sorry about what the other dogs did to you. I know you are so nice and polite but there are some mean spirited folks & animals out there. I agree with Goose, you let your big buddies handle the bullies. Hunter has had this happen twice and it scares me as much as it scares him.
Hang in there, you'll be bigger soon and then they will watch what they do.
Wags, Noreen & Hunter

Class looks awesome Murphy! Don't let those other dogs get you down, your just as sweet as the rest of them I'm sure, maybe you've got too much alpha in you!

Hey Murphy did your mom talk to Tanya about it. She is the best dog trainer I know and she has a degree in behaivioralism or something like that.

I am with Goose on this. Next time you have class, you call My Vickie and me and her will come and walk in behind you and if any one....I say anyone, gives you crap.....My Vickie will take care of them.

I'll be there for BIG support but I am not allowed to get nasty to other dogs, but beleive me, My Vickie may look gentle and kind but she does not like it when her friends get bullied and she can move pretty fast to protect you and teach them a lesson. (IN a non painful way, I promise)

See ya Friday morning dude, we can talk about it then......

Hang in there Murphy1 Sometimes other doggies can be mean, but it's up to their owners to correct them.