Doggies and kitties just wanna have fun, right?  So we all got together for Game Night.  Let's check out the action!

Berti and Addi challenged Mabel and Arty to a game of pool.  Berti suggested that they kick the balls into the pockets but so far the others haven't agreed to the new rule.  Meanwhile, Arty keeps whispering the rules into Mabel's ear.  Mabel keeps giggling so we are wondering what kind of tips he is giving her? 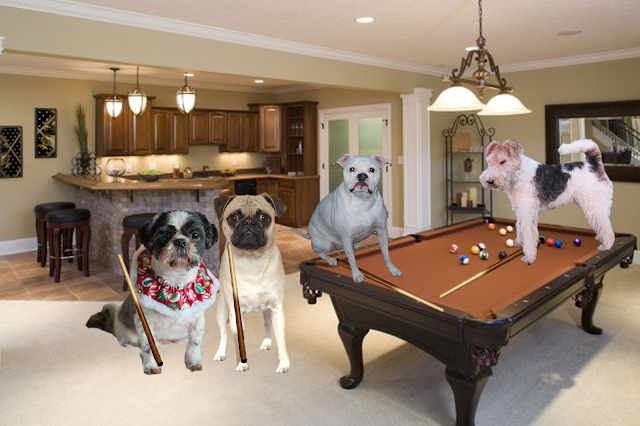 Shelldon and Beachnut are into Xbox so Casey, Pierre and Ciara decided it was their turn.  The Crabby Girls said they weren't done yet, it had only been 6 hours, so Casey stole one of the controllers.  Hmmmm . . . we heard video games can be addicting!  Pierre also mentioned that Casey and Ciara were smiling a lot at each other.  What could this mean? 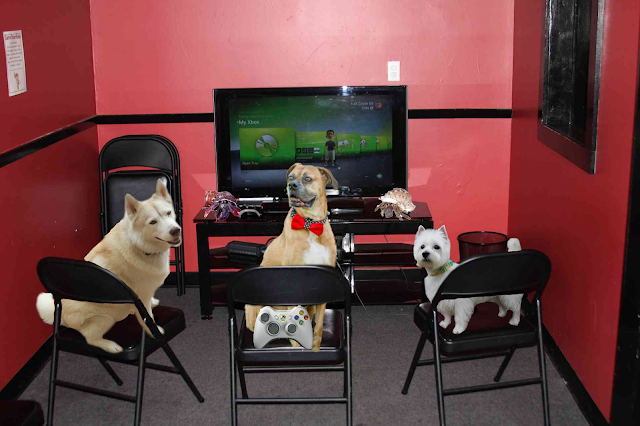 Checking outside on the Twister game we found that Ernie and his steady girlfurend Roxy are doing more cuddling than twisting!  Oreo said he wasn't bothered by their new rules, that just meant he and Hazel would win and protocol would call for a victory kiss!  OMD, it's like Hormones-Gone-Wild in Blogville! 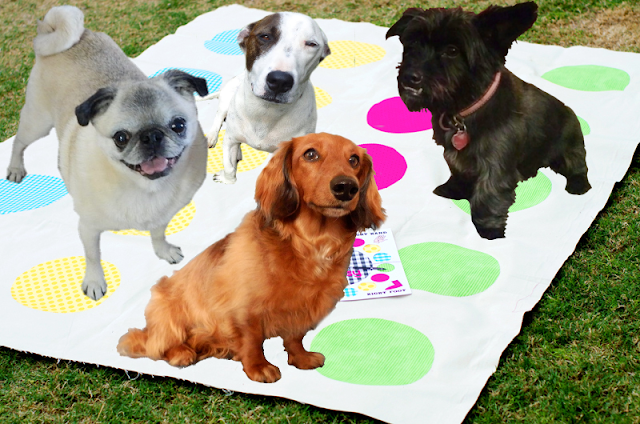 It looks like Joey and Momo are on the pool table (literally).  Judging by the looks on their faces we suspect Joey might have sunk the eight ball.  Jakey, Ginger, and Bilbo are into an intense game of poker.  It looks like Jakey has the biggest pile of chips, followed by Ginger.  Wait a minute . . . why is Ginger laying on top of all the chips?  We hope Bilbo is keeping a sharp eye on the other two!  It looks like Madi has turned out to be quite the Pinball Wizard.  She's sure got fast paws!  But of course everyone is waiting to see if she wins and if doing so will demand a Victory Twerk? 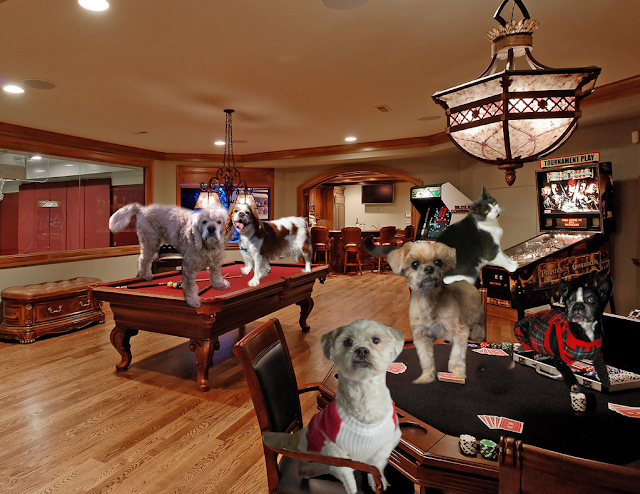 Looks like the ping pong action has come to a halt due to Matt stretching out on the table!  Newly engaged couple Murphy & Ruby along with the young Ziggy, are waiting him out.  Ziggy was overheard saying that if Matt didn't move soon he was gonna go check out some chicks!  OMD, Ziggy, you are growing up! 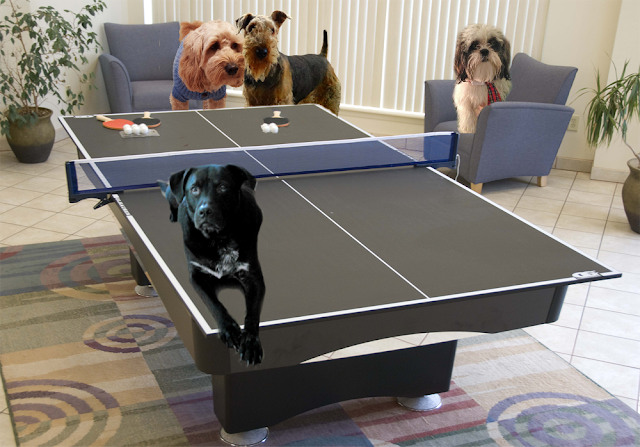 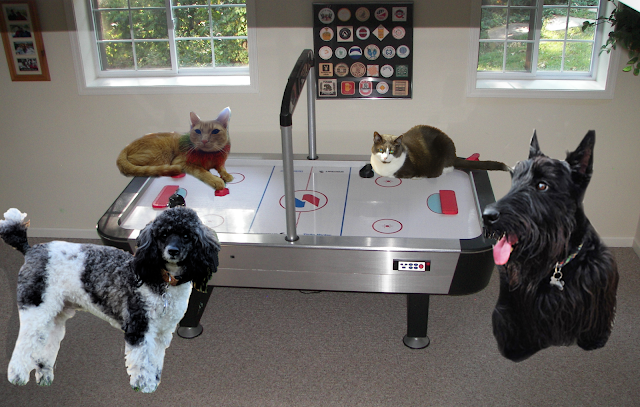 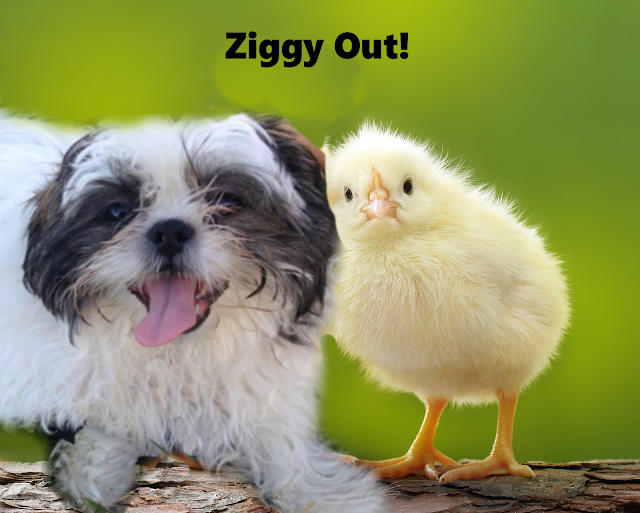 Game Night continues over at Dory's place so be sure to pop over and check it out!

Murphy & Stanley
Posted by Murphy at 4:00 AM

I am pleased to report that Arty and Mabel did finally agree to play by MY rules. (Although only after Addi threatened to run over the pool table in the Tank...)
Gosh these Hijinks are getting more fun every day.
Toodle pip!
Bertie.

I bet Beachnut and Shelldon are the bestest x-box champions... we pups with our paws can learn a lot :o)

MOL MOL MOL Air Hockey who knew that cats have lots of natural abilities
Wesley and Ranger might as well throw in the towel.
I don't know where this venue is but DANG every room is gorgeous!!
Hugs madi your bfff

Everyone sure is having a great time. Thanks for putting all of this together. It's so much fun.

Casy and Ciara make a great couple. AND Casey lives near our human brother in Texas, so maybe we would all get to take a road trip to visit Casey and his sister.

All those games look like so much fun - what a great way to spend some holiday time with furiends.

BOL we think Bertie may be cheating
Snorts,
Lily & Edward

Hey Doods!
Wow, this is the bestest week of hijinks EVER! OMC(lawd) the crabby girls are totally agog at the video game console. Those long and lovely leggies aren't just for show. POL Pretty smart of Ernie to go Twisting with Roxy...long doxie and his sweetie.
Grr and Woof,
Sarge, Police Commish

Oh, and BWAR HAR HAR to Ziggy and his CHICK! Oh, someone's gonna have to have "the talk" with him.

Nothing like standing on the pool table ...to help move the game along. LOL

Casey and Ciara???? Are they going to be Blogville's newest couple???

OMD what GRAND FUN everybuddy is having... IN THEIR OWN SPECIAL WAY>>> Right Bertie?
Our Games... OUR RULES... Hope Madi wins and gives everybuddy a Victory TWERK... We all LOVE THAT WILD TWERKER fur sure.

Game night was such a grreat idea! I'd like to say I didn't STEAL the controller. The correct word is "appropriated." It was my turn!!

Game night was such a grreat idea! I'd like to say I didn't STEAL the controller. The correct word is "appropriated." It was my turn!!

BOL...We are laughing at Mama cause she didn't get the Ziggy/Chick reference until JUST NOW....
Sometimes Mama is a bit slow....
Smileys!
Dory, Jakey, Arty & Bilbo

Wow it looks like so much fun, we are peeved at our mom for missing this....stella rose

BOL BOl Bol! we did not get the Ziggy/Chick either till now!!! Ha ahaaaa
Gosh what a great great time, although Mom wants to know what Arty keeps whispering in my ear!
hugs
Mr Bailey, Hazel & Mabel

Wow! Who's the chick with Ziggy? ;)
Yours sincerely,
Margaret Thatcher

Dad wishes he had gone along with Joey. He loves all those types of games!

Dad wishes he had gone along with Joey. He loves all those types of games!

Hehehehe Ziggy is that what you meant by "chicks"? MOL!

Wow... what a party! And we love what Ziggy meant by "chicks"! BOL!

Murphy and Stanley, I need advice as I guess I don't know much about chicks. Can you help me please. I was hoping to dance with someone on Nw Years Eve.

The Adventures of The Bell Fur Zoo said...

BOL I was just keeping the chips warm I swear ;)