Mom says she is never going to get the photos me and Stanley took sorted out.  So we thought we would share a few with you.  We went on one really short hike to see the waterfall.  There wasn't a lot of water but it fell from over 300 feet. 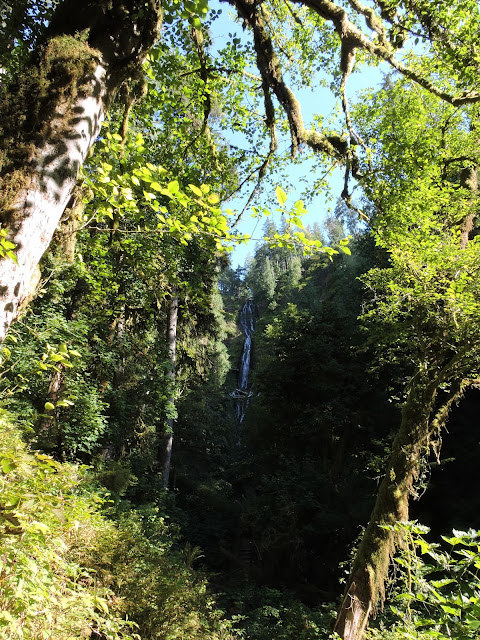 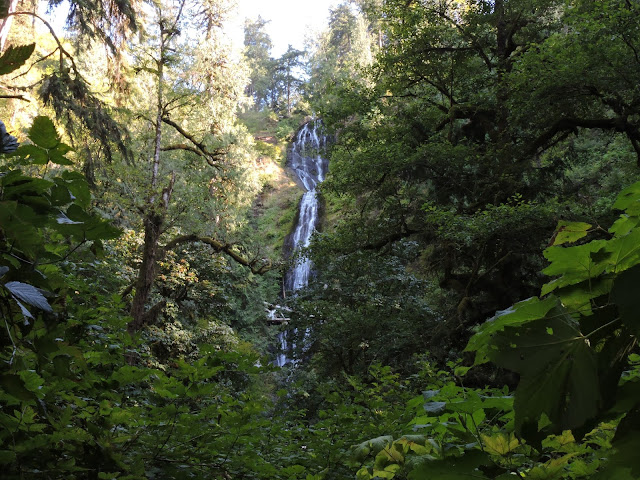 The short trail was very green.  Mom kept saying we should watch out for ticks. 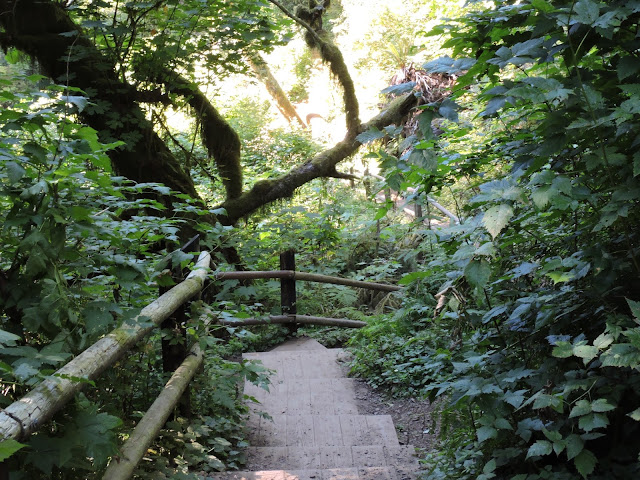 There were huge trees (not like at Dory's place).  We don't see too many huge trees in Utah. 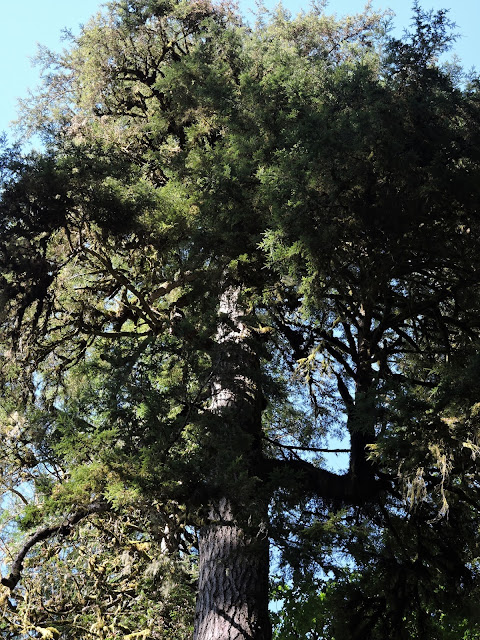 Later in the day, we saw this fella just staring at us. 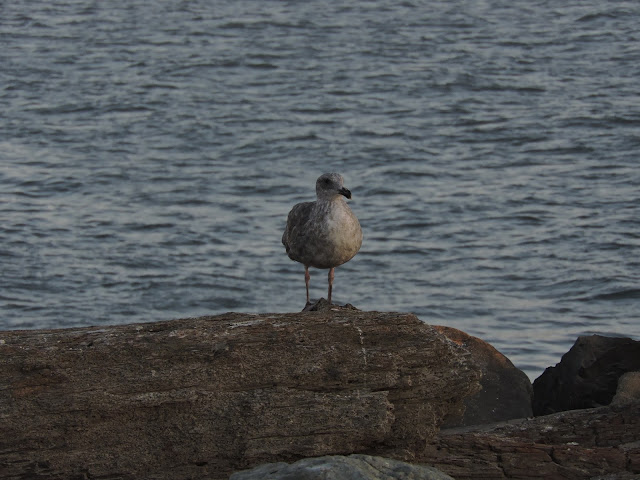 This was on the trail to the lighthouse. 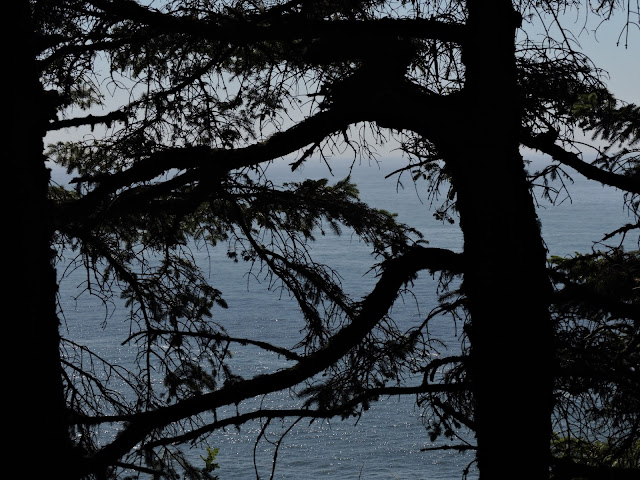 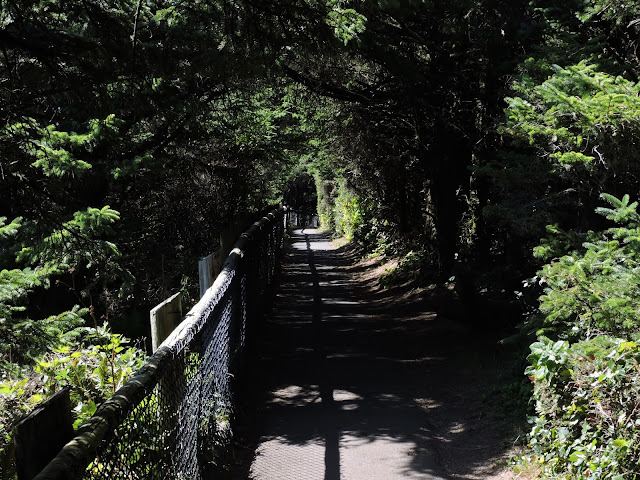 We went on another hike, the one where Stanley was nearly killed when a big black dog pushed Stanley off the trail and if not for his harness he would have fallen down into the ocean.  See that fog?  By the time we got to the end of the trail it totally closed in on us and we couldn't even see the ocean!  It was supposed to be a good whale watching spot. 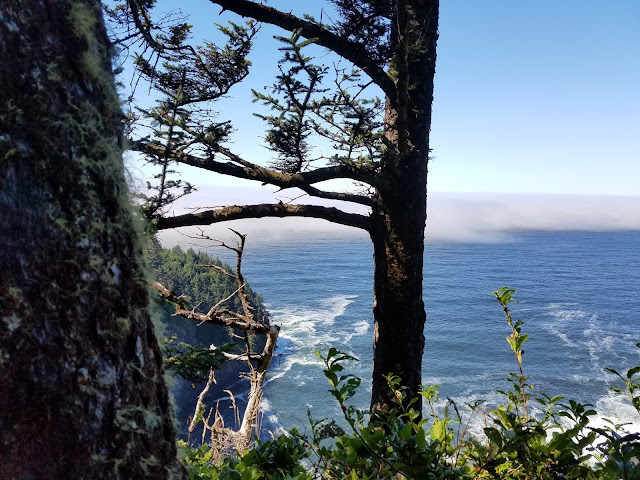 Some of the trail was really rough due to so many tree roots. 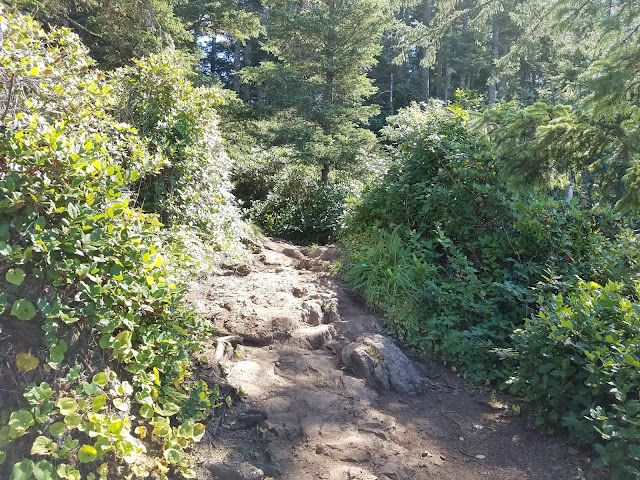 But me and Stanley liked the challenge. 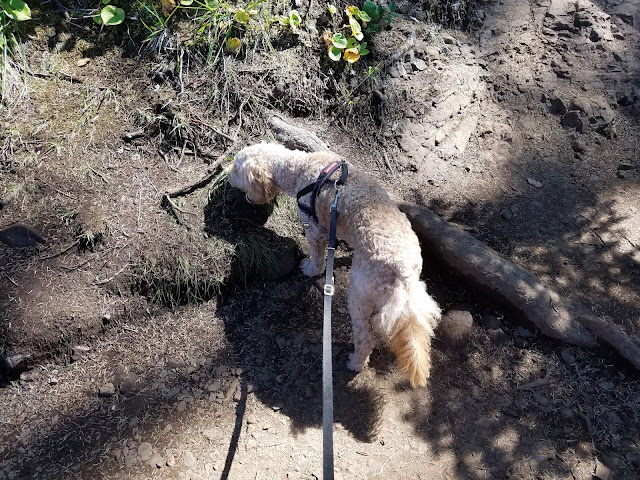 We liked jumping on and over all the roots. 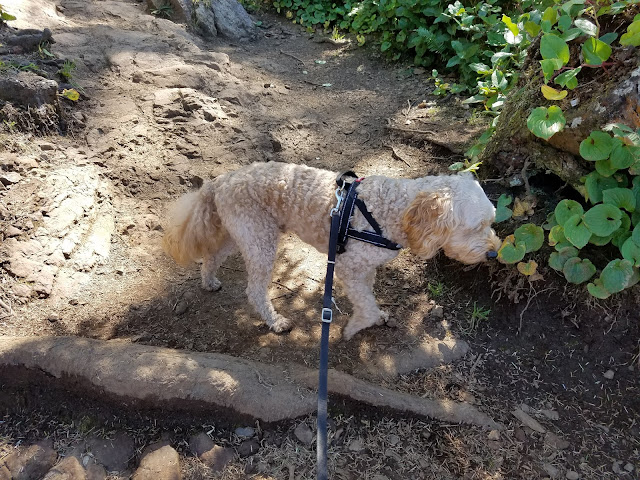 The fact there were muddy spots was just a bonus. 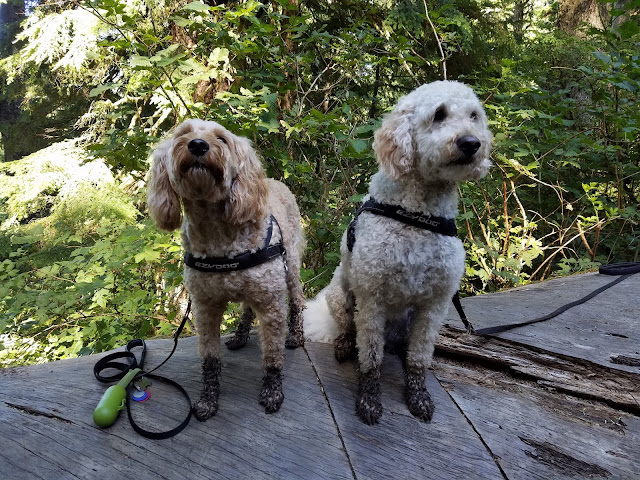 On another hike we took it had so much growth from trees and ferns that we thought we made a wrong turn and went to someplace tropical. 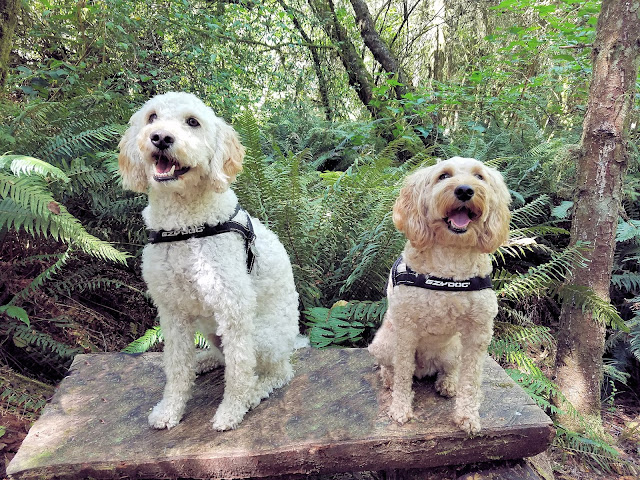 Mom was amazed!  It was the trail where the bulldog wanted to eat my face. 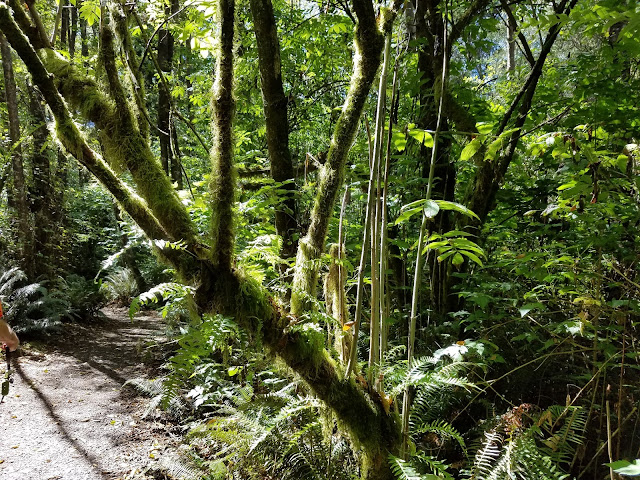 We had lots of hiking fun when we weren't at the beach!  Next year when we have the once-in-a-lifetime TOTAL eclipse we are going to go back to Oregon so we can see it!

OH MY CATS a dog pushed Stanley?! Good grief was he possessed or just out of control. He obviously didn't know Stanley had people he could call to form a posse to break out some serious whoooopppping. Geez that must have been scary.

The photos are very pretty. My peeps want to go to the Pacific northwest one day....

Yep not many photos of me until 2009.....and now she is a shamed to say how many she has ....way more than she has of my human sis. MOLMOLMOL Now who is the #1 daughter?
Hugs madi your bfff

So much beauty....Mama and Daddy say we are going to take a wheelie house to ORegon next year...maybe we can meet up!!

We know all about that ocean eating fog. It has been here ALL MONTH!!
Smileys!
Dory, Jakey, Arty & Bilbo
...ummm, Mama wanted us to ask you...where is the lighthouse??? We're sorry, she is obsessed.

OMD, Stanley!! You nearly FELL?! Off a CLIFF?!! OMD, you are SO brave!!! Do you have any injuries that you need me to kiss and make better??

Those pictures are so good we can smell the trails. We love the waterfall. We are so happy you had your harness on. Bad black dog. Bad dog

Oh, WOW....guys! That looks FABULOUS! Glad you were wearing your safety harness and had your peep firmly attached. So much great stuff to see and sniff. A fantastic holiday.

It looks like amazing hiking. Took our breath away.
Lady said to tell your Lady she is waiting Suits on Netflix right now. That is her current show.

These pictures are absolutely amazing! I have never been to Oregon and have always wanted to go. The fog is incredible, but still love the ocean views

Wow! What an adventure!

I am glad Stanley is safe! Mom grew up spending her summers at Cannon Beach, where here family rented this tiny little cabin each year. Such a beautiful area.

OMD....Poor Stanley.....so lucky for that harness. I'm still shaking reading about that! And....a bulldog tried to eat your face. I don't know if I'd go on that hike again...just sayin! :) You sure did take beautiful pictures though!

You guys have the most fun trips!

You always seem to have the most fun adventures! That's a beautiful trail.

That trail looked more like a tunnel than a trail. Good thing you had your harness on so you couldn't be shoved over the edge.

OMD!!!!!! TICK TACK!!!!! WTD???!!!! I am sooooo glads you guys have harnesses!!! That would not have been good, cause I knows that your Moms would have jumped into the ocean after you!!!! Then my STUD MUFFIN would have followed, then your Pops! Then there the four of you would have been swimmin' in that cold Pacific water! OMD, that is just too scary for words!!!!
(are you okays my Boo???? You didn't bite that nasty dog for what he did to your Brudder did you?? I would want you to gets cooties or anythings!!!!!)
Phew. Anyhu, I loves the muddy paws!!!!!! I thinks that should be the new look for Fall.
Oh, and my funky ear is doin' good. Wednesday will be two weeks, and Ma's got her paws crossed that this will do the job. Paws crossed!!!
Kisses,
Your Fiance, the one with the Funky Ear and the Funky smell, Ruby ♥

Oh that is totally my kind of hike - lots of variety, lots of challenges, and muddy paws as a bonus. Cross paws the ticks stayed away.
Toodle pip!
Bertie.

wow that black boots are made for walking huh? I love this place... it is like discovering a part of the world like that cow-lumbus :o)

What a great vacation! WTD? A dog tried to eat your face and then push you into the ocean?? How rude! Obviously, it had NO idea who y'all were.

what a gorgeous place to take a hike, so lush and green!! I just loved these photos!
DakotasDen

Great pics, guys. And what a fun hiking adventure. We 💕 Oregon and their green trails. Thanks for sharing.

So lush and beautiful
Lily & Edward

What a beautiful walk! Love those muddy feet!

What a great vacation! We love living in Oregon, their are lots of fun adventures to go on.
Sorry you had some bad memories of super naughty dogs!! Glad you guys were all ok!

I am quite jealous, because I find it very hard to walk over rocks and stones and tree roots and such. I do love the muddy feet though. I once took a puddle jump walk (a long time ago) and was absolutely soaked and dirty. It was great fun though!