One day when we were in Indiana, we stopped by mom's niece's house and met a Golden fellow named Rebel.  Me and Stanley were kinda unsteady around him cuz he was HUGE! His paws were as big as dinner plates!  Mom said it was the furst time she noticed that Stanley was NOT a big dog (even though he thinks he is).  Here is Rebel acting pawfessional. 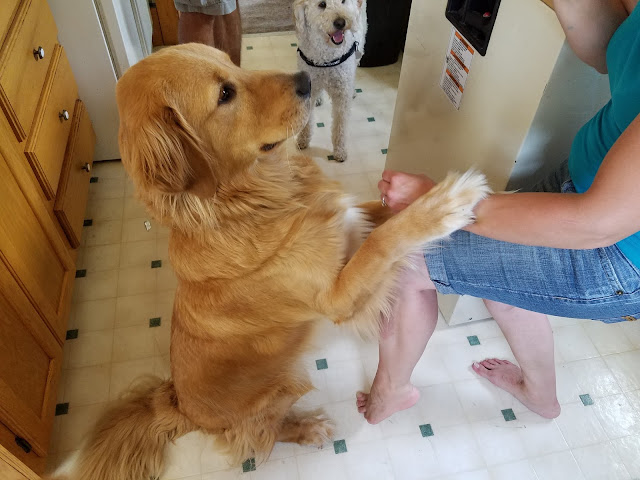 While the hoomans sat around the table Rebel would rest his giant head. 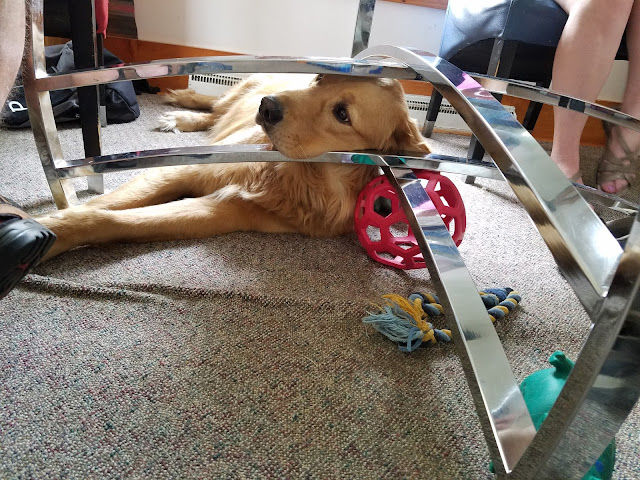 One time when he put his paw on Stanley to get him to play, Stanley about jumped out of his furs and screamed that Rebel tried to punch him!  Mom said he was greatly exaggerating and Rebel was just extending a friendly paw but after that we called Rebel "Sasquatch". 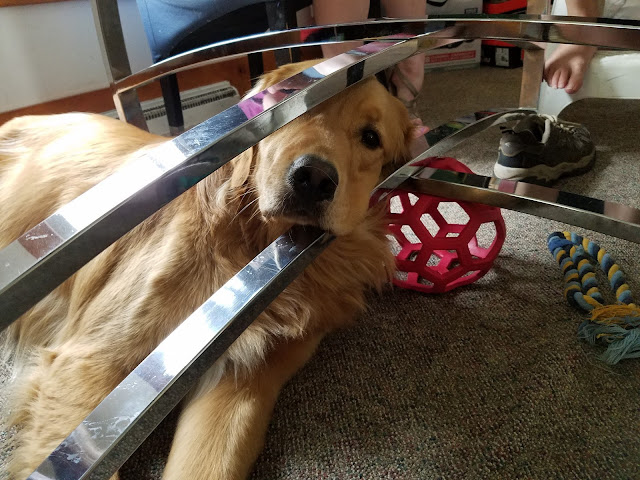 Sasquatch had a rubber piggy he liked to play with and when he did he would make a rumbling noise that sounded like it came from so deep that it might erupt and kill us all!  Mom said we were being ridiculous.  We posed with Sasquatch even though we knew it was risky and at any moment he might sniff one of us. 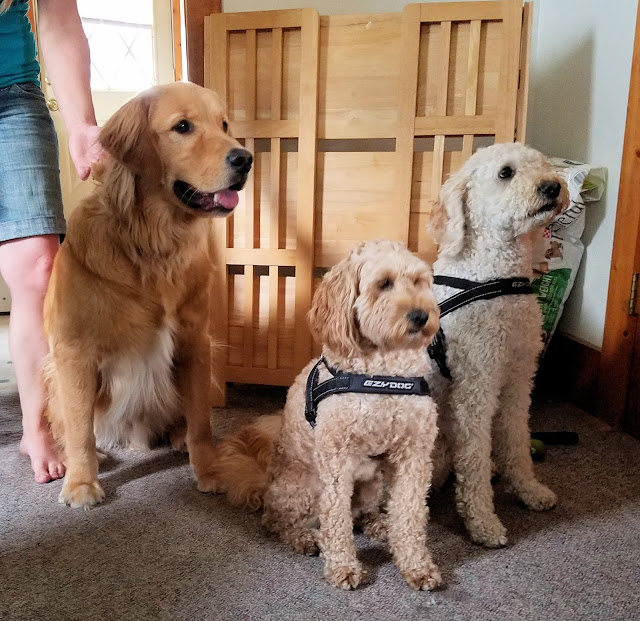 One thing Stanley really liked was that Sasquatch had a HUGE food dish (it was about as big as a kiddie pool or maybe even bigger) and it was filled to the top with the most delicious kibble.  Stanley kept helping himself and Sasquatch didn't care (he said "sharing is caring").  Here is Sasquatch with his mom.  Those shoes belong to Sasquatch and he wears them on his giant paws. 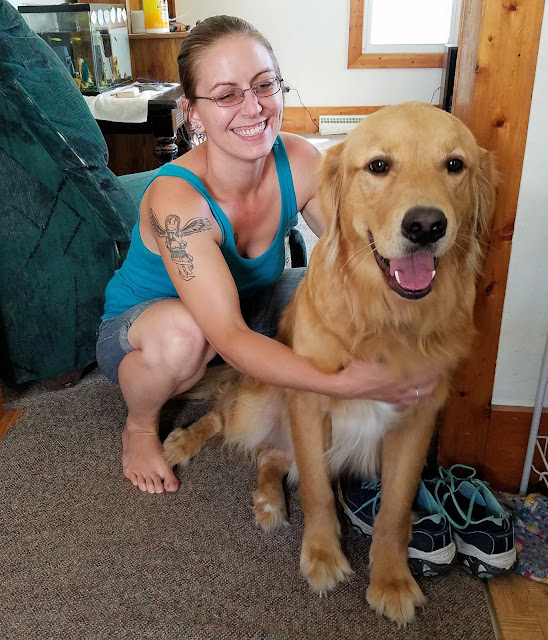 I just played it safe and stayed on mom's lap.  I wasn't taking any chances that Sasquatch might sniff me.  Here I am giving some Doodle therapy to another niece.  I changed her life with that therapy. 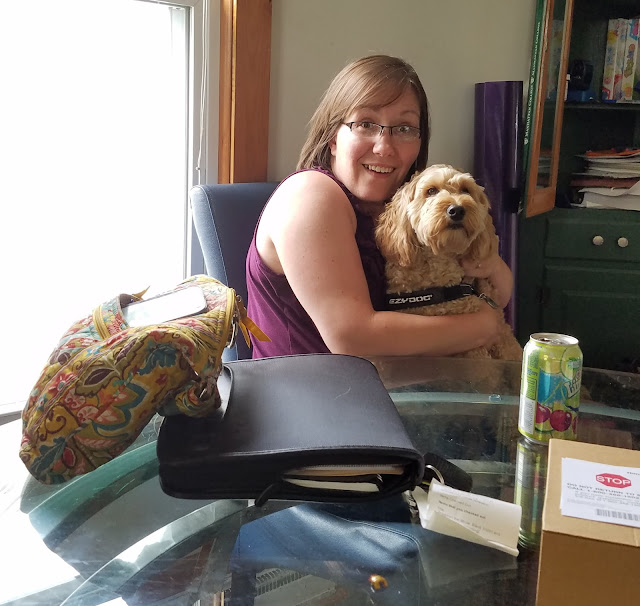 When we went in the yard and saw a giant poop (it was at least as long as a hooman arm) we respected Sasquatch a lot for that. He does good work! We had fun even if Sasquatch made us kinda nervous.

wow... with that giant paws Rebel would be a great helper for digging the new euro tunnel.... can you ask him please if he has time?

Rebel is a BIG, adorable guy! Are his paws really the size of dinner plates? WOW

Gosh, Stanley really is quite tiny. Who knew!

What a big, beautiful furry playmate!

Jumping Catfish Rebel/ Sasquatch is a big Golden Boy for sure. I guess Stanley find out quickly that he was no longer big man on campus. Mom cackled at Stanley hollering Rebel tried to punch me.
When my peeps moved into this house almost 33 years ago, a huge golden named Toby lived next door. My peeps had Toto the mighty mini dachshund and Oh did Toto like to tease Toby by running under him and nipping at the golden furs on his back legs.
Hugs madi your bfff

Rebel is so cute! You guys, we totally relate to being a little nervous of bigger dogs. Phoenix doesn't really like them and she will scream sometimes, too!

He looks like FUN! I do a lot of the same table poses that he's doing! Very comfy!
Yours sincerely,
Margaret Thatcher

he does make you two look a little small :)

Poor Rebel. We think he looks like one of those gentle giants! Bwahaahaa!

You are not used to being the little dog. To us every dog is Rebel.

The two of you look tiny compared to Sasquatch.

he may be big but he looks friendly
hugs
Mr Bailey, Hazel & Mabel

What a Golden Cutie :-) Love the name too Rebel! Golden Woofs, SUGAR

Wow, he's gorgeous! At the dog shows I attend a lot of the Goldens look like that...very well groomed!

Someone bigger than us can be a little intimating but it sounds like you guys did well around the fur ball known as Sasquatch. Good job.

Rebel is very handsome! It sounds a bit like maybe you became Rebel's cause. You know Rebel without a Cause. . . but then YOU BOYS became his cause...;p

P.S. How big are you boys again? And how big was Rebel?

We are so impressed with Sasquatch and his giant poop!! He seems like a great dude. You are both very brave.