A Visit To The Dogtur

Yesterday eye, Murphy, had to go see Dr. Eddy.  Eye had a thingie on my I-lid and mom said it was getting bigger so eye needed it checked out.  So after our run she called and they said Dr. Eddy could see me right away.  Stanley came along for moral support. 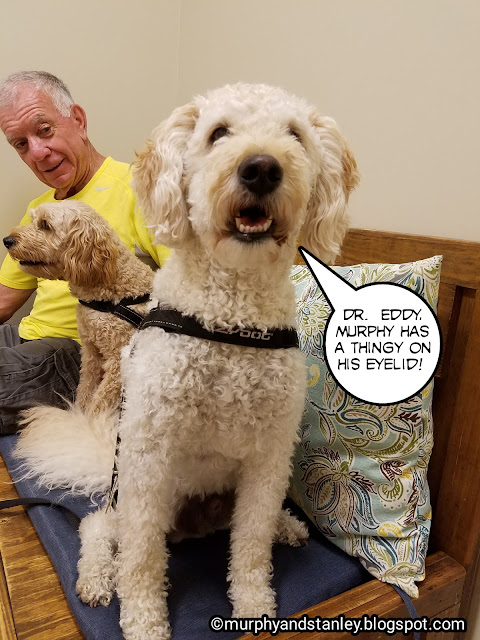 I like Dr. Eddy.  Usually we go to the dogturs at Hill AFB but for impawtent stuffs we go to Dr. Eddy. 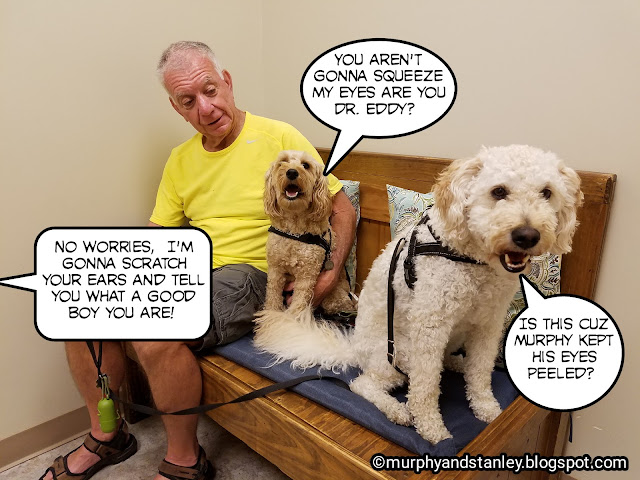 It's true.  He said I was a very good boy and he was amazed how I let him play with my ears.  He said he couldn't believe it.  So he looked at the thingie on my eyelid.  Of course I was concerned about what the treatment would be. 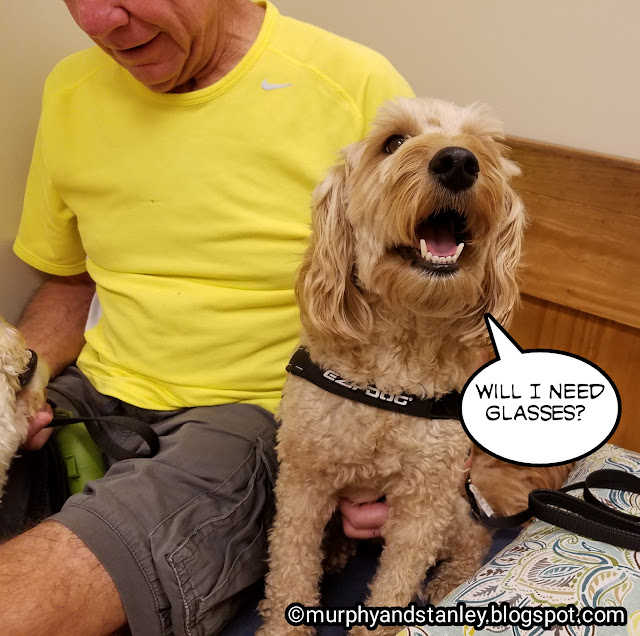 My biggest fear is to need glasses cuz they would bounce off with all my fancy fetching moves.  Dr. Eddy said he didn't think I needed glasses. 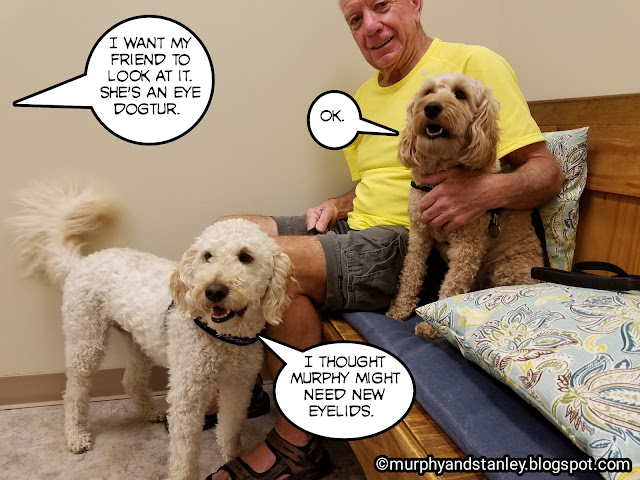 So now I have to go see the Special Eyes Dogtur.  Mom said it was only for doggies with special eyes.  Mom called and left a message for an appointment but they haven't called back yet.  But I figured I better work on the backup plan just in case . . . 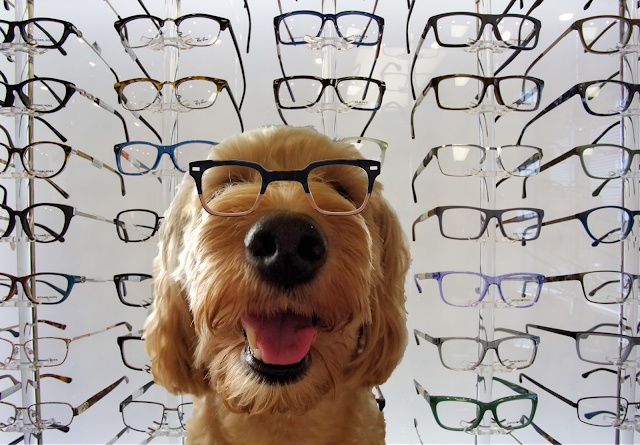 
Mom Note:  At this point it looks like a small cyst but Dr. Eddy wanted an ophthalmologist to look at it due to it's proximity to Murphy's tear duct. We aren't overly concerned but it seems to be getting bigger and we want to follow up and get it taken care of while it's small and easier to deal with.  Murphy is very concerned about the glasses.

is that the same Dr. Eddy Goose had and who takes care of Buddy now? Then he must be super good. We hope the eye-dogtor has good news for you and a magic potion to chase that cyst away... that's better than glasses, I agree. For the mama it was the end of her whole life and she was sure that she will die lonesome and furgotten like a spider in a cellar , when she gets glasses... at least the 14-year old teen-mom said that to her mother :o)

We cockers know a lot about eye problems! We hope it turns out to be nothing bad.

I'm sure you'll be ok, Murphy! Yeah...how are you supposed to protect Wilson from Stanley with glasses? BOL!!!

We must say, youo do look very intelligent in glasses, Murphy! We hope it is just a cyst that will go away by itself :-)!
Healing Smileys!
Dory, Jakey, Arty & Bilbo

Well Murphy I think you are right to be concerned about glasses.
Paws crossed that the special eye doctor sorts you out pronto.
Toodle pip!
Bertie.

OMD!!! MY STUD MUFFIN!!!!! I am sooooo glads that you went to see the dogtor right aways, so he can gets that cyst from bothering you. I am so sorry you gots that yucky cyst, butts I thinks you look ManTastic! in your glasses!!! Yes I DO! I thinks you look like a Professor or somethings! I am hawt for teacher!!! BOL!!!!! oh, sorry, forgots your MOms sometimes reads your bloggie....hehehe
I gots my paws crossed real tight that your eye is a-okays, and sendin' tons of POTP and healin' vibes and lots of my very special AireZens!!!
Kisses,
Your Fiance, the one with the stinky furs and FABulous voice, Ruby ♥♥

Murphy, we will keep our paws crossed that this is just a cyst and no glasses will be needed!
hugs
Mr Bailey, Hazel & Mabel

Well, we hope you don't need glasses, but if you DO, you look really smart in those ones.
Both Cammie and I have been to an ophthalmologist. (Part of the agreement with our breeder.) They were SUPER nice there when I went - I even got cheese from the magic squirt can from them. It was awesome. Frankly, all I remember is meeting lots of people who gushed over me, getting snuggles, the cheese, and I think I kissed an intern. I couldn't help it.
Anyway - I hope that's how good your appointment goes, too!
Yours sincerely,
Margaret Thatcher

AHHHHHHHHHHHHHHH Murphy you need not worry about glasses they make you look twice as smart as you are and I bet it you look really hard you can see your Cherry Bomb way down in CA. Sending hugs to you as you wait for the Dogtur sometimes it takes furever to get a call back
Hugs madi your bfff
PS tomorrow will be 1 month since my peeps first touched your soft furs.

Maybe contacts would be a better alternative for your active lifestyle. We really hope it is just a little cyst and the treatment is easy.

hello murphy its dennis the vizsla dog hay wow it sownds like yoo git sum gud kayr their at doctor eddys!!! if they do need to giv yoo glasses ask for the xray kind then yoo kan find owt wich kitchen kabinets hav the best foods inside!!! ok bye

We have our paws crossed that your eye thingy can be taken care of easily.

OH how I WELL REMEMBER the SCARY EyeBall stuffs... And the EyeBall Specialist that I had to go to in Columbus...
So I'm thinkin this might be related to all the READING that we have to do as Mayor of Blogville... We Strain the Brain and EXHAUST the EYEballs... keeping Blogville Running like a well oiled machine. If you have to get Glasses... they should be COVERED under ComPAWnsation.
Hey DUDE... it's ME Ernie... Man those Glasses will Drive the WIMMEN crazy when the Bad Dawg Agency (BDA) has the next concert... they will be throwin their Collars on the stage... and RUBY will be .... MIFFED. Just Sayin.

You really made us laugh. We are praying that this is no big thing.

Don't worry. If you have to get glasses, you can always ask for contact lenses. haha

Seriously. you are getting lots of attention and good care. We're sure you will be okay.

No worries, Murphy!! You're in very good hands! Like many said, contact lenses are other options for you. Can you believe our human mom has been wearing them for over 30 years?

We sure do hope that it gets taken care of and you don't need glasses...we agree...contacts would probably be a better choice for you! BOL!

I hear you about the glasses. I wear them and whenever I do some exercise, they keep slipping down! I hope they can solve it some other way.

On the bright side, eyewear could make you look very geek-ish and no one will believe you're really a fast rocket chaser of Wilson. Good luck, buddy. 😎

I hope that it is nothing and the dogtur will fix it right away. As far as the glasses, you look quite dashing in the pair you are modeling. Ruby is going to love the studious look. ☺

I hope it falls off,, I had something on my lower lid,, and finally fell off when I was scratching my face,,
I hope yours falls off too,, or easy to remove.,
love
tweedles

You look very handsome in glasses, Murphy. Maybe you can get some of those sport goggles for when you play fetch?