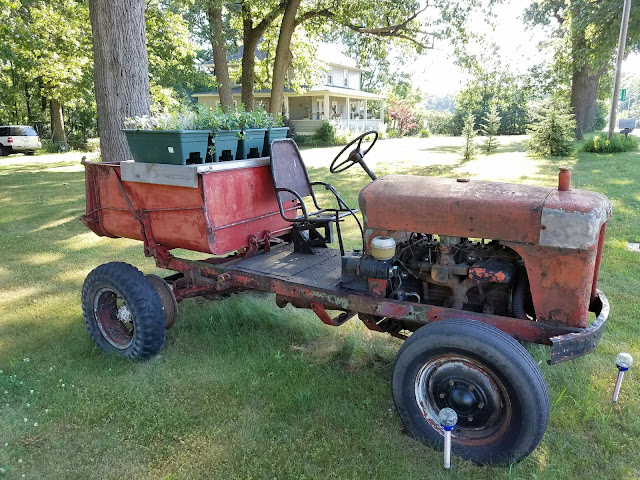 Our pawrents were running and saw this tractor. It is a 1949 Ford,  used on golf courses. The man told mom all about it and how Jack Nicholas used one in a commercial years ago.

We are wrapping up things here in Indiana and will head west in the morning.

Mom wants Hailey and Phod to know that she and dad got new phones when they switched to Verizon. Mom came back from a run and tried to open it. She did not know that the setting to erase all data after 15 failed attempts to  open the phone was activated.  She had 4 left when she noticed it. It didn't recognize her sweaty fingerprints.  All her vacation photos are on the phone!!  If she failed 4 more times they would be erased!!!  So she used the advice that  "The Man"  gave her and it saved the day!!

Your Pals,
Murphy and Stanley
Posted by Murphy at 10:01 AM

The Man saved the phone twice! We know what certificate he is getting at the next BAR! Safe travels home!

What a cool tractor. So happy yo saved the day on the phone!

Safe travels and be sure to leave all the ticks and fleas in Indiana!!
Hugs madi your bfff

We're glad Man was able to save the day. If all those photos had disappeared...well, we don't know what would have happened!

Happy Father's Day to your dad!

Aroo to you,
Sully

Whew, glad your momma didn't erase all her pics! Momma uses her passcode instead of fingerprint recognition after a run, because of her sweaty fingers.

WE are SOOOOOO happy that Lee and Phod's Man was a DAY SAVER... he is one of the GOOD GUYS fur SURE...

Thank goodness you didn't loose all those great BAR pictures. Have a safe trip home.

Yay for The Man! would have been a real bummer to lose all your photos
hugs
Mr Bailey, Hazel & Mabel

OMD, I hopes you didn't lose all your GORGEOUS PHOTOS!!!!! I knows there are tons of pics of you my STUD MUFFIN!!!!!! I can't waits til you are back home so I can hears your sweet voice clearer! I have been able to hear you, butts it's been kinda like your Ma's old phone...in and out (no not the burgers! BOL!!!! butts, that does sound tasty...) I will bark three times for you tonights and hopefully I can hear yous!
Kisses,
Your fiance, the one with the most FABulous furs, Ruby ♥

Ha seems my future FIL is a hero on all fronts :o) I'm glad the photos are not gone with the wind, that would be super sad... and you probably had to come back next week for next BAR :o)

I'm so glad that all the photos weren't erased! That would've been terrible!

What a cool tractor! Frankie and Ernie need it for their garden. I hate when I try to do something and my phone doesn't cooperate. Are your pics okay?