The Dead Body - A Serious Story

When we were gone and trying to post from mom's phone, we mentioned a dead body.  Mom told us about it and showed us where it happened.   Here is the REAL and TRUE story as mom explained to us.  Mom spent the first 18 years of her life in Indiana.  All but the last few years she lived in a place that was just a bit more than an hour from Chicago.  She says an hour from Chicago will get you lots and lots of this . . . 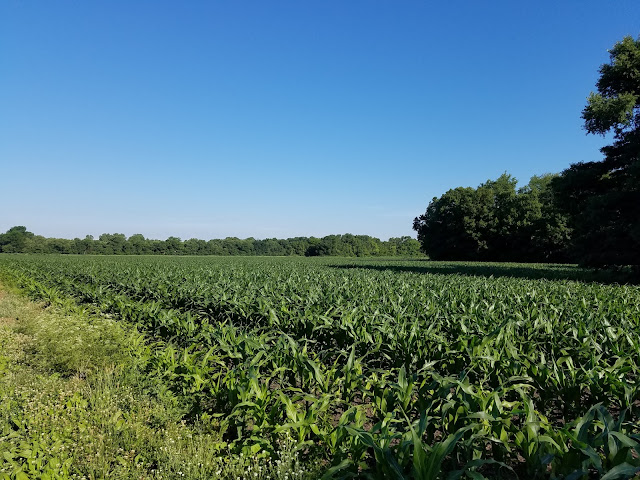 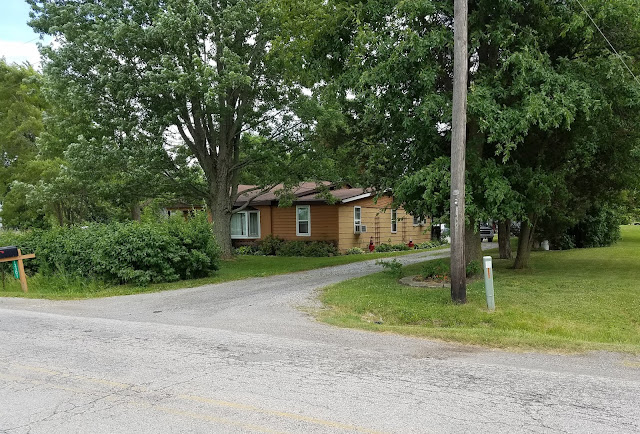 She lived there with 2 sisters and 2 brothers.  Mom says it was a tight fit.  During the day, mom and her siblings would spend the day exploring or riding their bikes.  One of the places they often went was a place called West Creek.  Here it is . . . 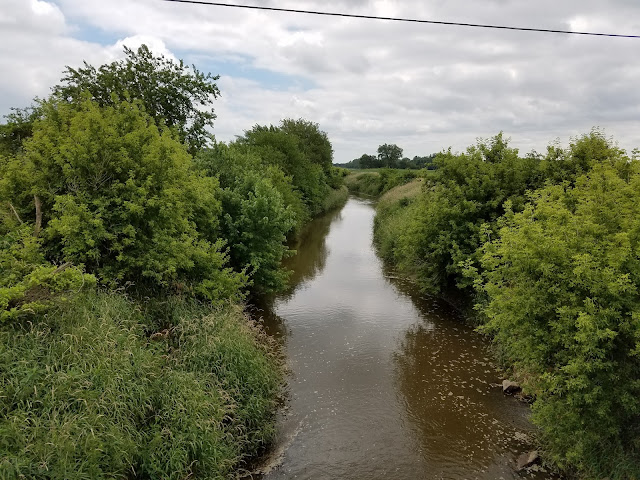 Mom's brother and younger sister would go there to fish or look for worms.  Mom went there to smoke.  On this day her brother, sister and a friend were walking along the banks of West Creek looking for worns. They saw a car stop on the bridge and throw something off.  But they were quite a ways from the bridge at that point.  This is the bridge where the car stopped. 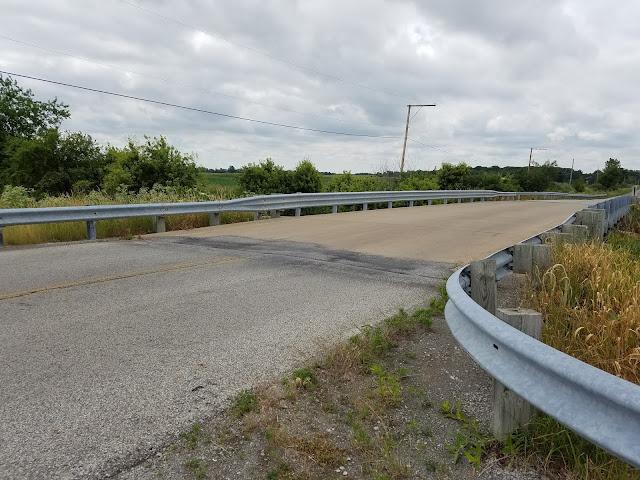 This is a view of the bridge looking back on where they lived.  Mom says it was in the Boondocks. 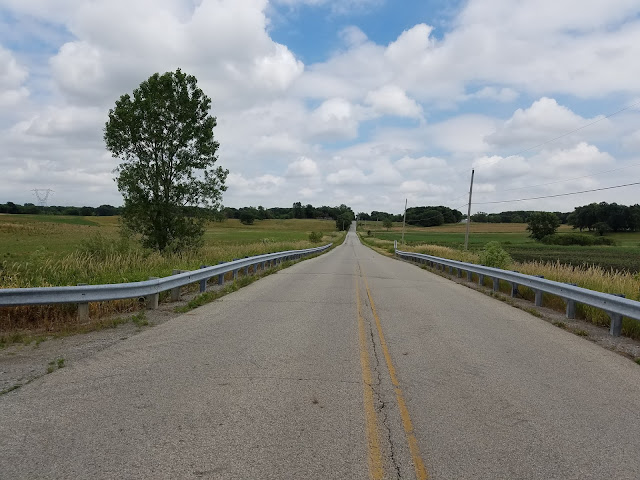 When the kids gave up looking for worms and came back to the bridge, they came across the dead body on the same trail they had taken to hunt worms.  This is a view of where the body was thrown over. 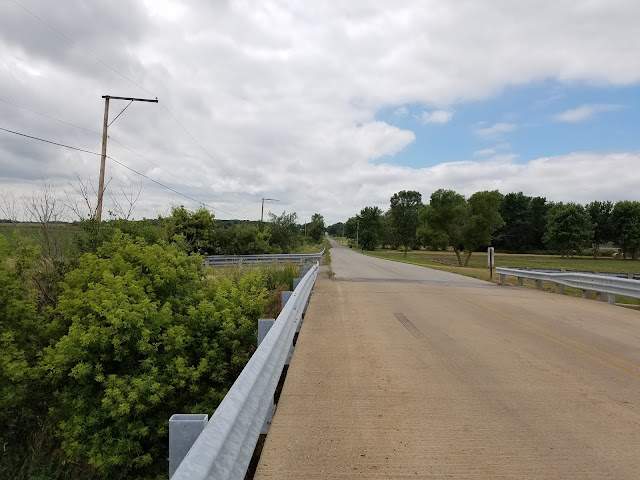 So the kids went running home to tell their parents.  Then the rest of the family went to the bridge (to see if it was REAL) and notified police.  Yes, it was real.  Mom could see the woman's broken leg sort of sticking up pointing to the sky.  She didn't feel the need to get any closer.

As it turned out the woman had gotten an illegal abortion by a physician in Chicago.  She died as a result of the procedure and he dumped her body in hopes of not having to deal with the reality of the situation.   So now you know the story of when mom's brother found the dead body.

What a terrible thing to find and a very tragic end for the poor victim.

OMD....That sounds like one of those Stephen King stories Mama reads...what a tragic thing to happen...

Wow! That's amazing to have found something like that!

Oh my word...what a terrible thing for children to find. My goodness it sounds like the quack who preformed the abortion was caught.
We hope your mom and sibs were able to put it out of their minds.
Hugs madi your bfff

Oh what a dreadfully sad story all round, and how traumatic for your mom.

Oh, my goodness! That poor woman and baby! -- and what a thing for your mom and her family to see!
Cammie!

Oh my gosh, what a terrible thing for children to find. I am sure it has had an affect on your Mom and family. That is a real Stand By Me story. We are very sorry for the poor woman who lost her life. Thank you for sharing pictures from your Mom's childhood

Tick and Tack,
Rain is wet....your mom has gotten funnier and funnier now that she is 60!!!
Hugs madi your bfff

hello murphy and stanley its dennis the vizsla dog oh hay wow that is a tradjik storry for evrywun!!! it must hav ben verry trawmatik for the yung hyoomans to see and for the poor womans famly!!! sumtimes in fakt mor offen then i wood like hyoomans just do not no how to treet wun anuther!!! ok bye

The Adventures of The Bell Fur Zoo said...

OMD OMC that is crazy! We would have passed out!!!

Wow! What a scary story. Thanks to your brother being in the right place at the right time they found this poor woman sooner than they probably would have otherwise.

We are sure that it has given your entire family somethingy that they will each remember... FOREVER.

HOLY CRIME SCENE!!!! It's like an episode of and ID Channel story! Not something youngins should have to see, butts at least her family knew what happened to her.
I'm sure they were very grateful for that. {{{hugs}}}
Nows....MY STUD MUFFIN!!!!! I heard your three barks and howl and two barks last night!!! It was MUSIC to my ears!!!! I could barely gets your barks when you were on the road, and could gets any sweet whispers! It was terribles!!!
Okays, I'm goin' out now to start our barks.....
Kisses,
YOur Fiance, the one with the most FABulous furs, Ruby ♥♥
Cherry Bomb furever!!!!

Holy yikes, guys! That was some kind of very scary story. Unfortunately I think too many women suffered bad procedures that resulted in all sorts of bad outcomes.

Even though we can imagine how traumatic this would have been for everyone involved, your brother can hopefully find comfort in the fact that in seeing what he did, he allowed the young woman's family to have closure and to know what happened to her. How sad that she lost her life so young and tragically and then was heartlessly disposed of in that way. May she rest in peace.

That would have scared the beejeebees out of me! It reminds me of a movie, for sure.