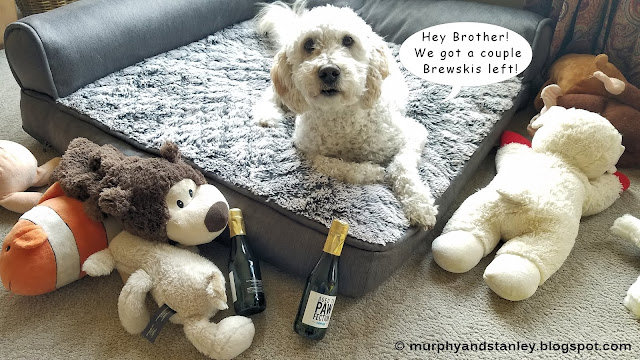 Stanley lasted longer than me cuz he's bigger so he can drink more. 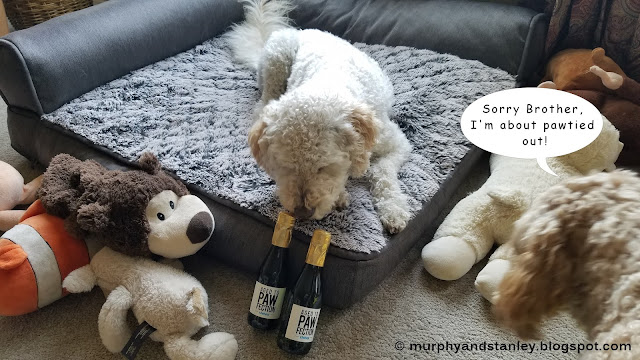 I think it's impawtent to know your limits. 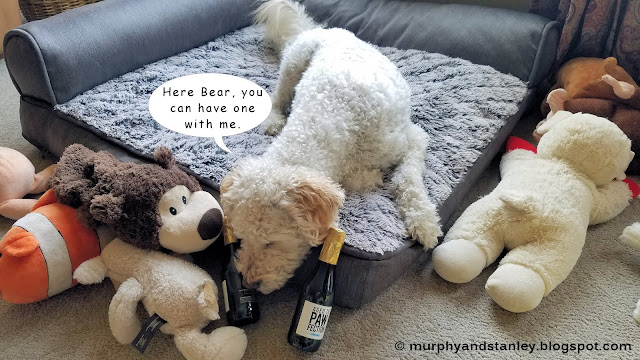 And now that we're headed into a new year, we just want to acknowledge 2 people who were unable to make the journey with us.  Sarah Ricca and Frankie's & Ernie's dad Butch both went to Heaven right after Christmas.

It's a sad thing to happen and Frankie & Ernie decided to wait until the howl-i-daze were over before saying too much. Butt we bet the minute those newest angels got their wings that they flew over to the Rainbow Bridge and are playing with all the doggies and kitties there! Frankie & Ernie are crossing their paws that Madi is NOT twerking in front of their dad cuz they would be mortified! (We don't worry about Sarah cuz she is used to that stuff.) 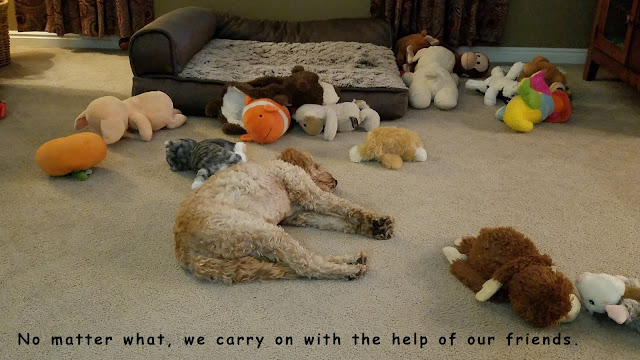 It looks like a fantastic party Murphy and Stanley. We were quiet here in NI!

Brom (and Mouse) from NI

Dearest Murphy and Stanley
Thank you for letting everyone know about the passing of Sarah and Butch. I am very very sorry. I hsve very fond memories of meeting Butch, FnE and Lana in 2016. B and I were at the same Red Roof Inn. We had several nice meals w them lots of evening conversations.
I recall all the wonderful smile boxes Sarah made for bloggers for different celebrations.

Knowing that crazy Angel Madi I can assure you there was dancing on the blouevards and streets OTRB. I CAN only hope she remembered to be a LADY with moderate twerking...but I DOUBT IT‼️💃🏼💃🏼💃🏼
Hugs Cecilia

We are so sorry to hear about Frankie and Ernie's dad crossing as well as Miss Sarah. Our thoughts and prayers go out to their families♥

This is such very, very sad news, but I appreciate you passing it on.
If only we could each right across the Pond to give Lana a hug.

I was all out of my doggy ale, so I just had water for New Years. Thank you for letting us know about Blogville's sad losses. :(

We were so very sad to hear about FnE's Dad and Miss Sarah...we know there are two more loving angels in heaven. Thanks so much for letting us know!

We're very sorry to hear about Sarah and Butch. But you're right: they're probably enjoying the company of all the wonderful souls OTRB.

We hope you guys and your family have a Happy New Year!

Thanks for letting Blogville know about Butch and Sarah. We were saddened to hear the news. We're hoping they may return to our community after a time.

Happy New Year Boys! Hope 2019 is filled with lots of great goodies and fun adventures. Has it been cold at your house? It's been so cold lately that Hunter hasn't gotten out on walks and he's hoping that 2019 is better in that area. We were so sorry to hear of the losses of friends-it's always tough.
Sending you big wags and lots of love.
Noreen and Hunter

We too were very sad to learn of the passing of Frankie and Ernie's Dad Butch - he was a very good Dad to the boys and a wonderful husband to Lana. And poor Sarah, she suffered for so many years and yet she also gave so much to all those pups in doxie rescue. We sent our condolences to all of their families. Soft woos and gentle hugs from all of us.

Hugs and Woos - Lightning, Misty and Timber and Mom Kathie too

What a pawty that was! Are you all back to normal today??? (Or are your heads pounding?)
BOL

On a serious note, we knew about our dear friend, Sarah, but hearing about Butch was such a shock. We had no idea things were that serious. Our deepest sympathy to Lana and Lori.

Have a wonderful New Year.

Such sad news about Sarah and Butch - dey will be missed.

WE appreciate you doods telling us about F&E's daddy. We are sending lots of pug love and hugs to them and their mom
hugs
Hazel & Mabel

We had a quiet New Year's Eve and are hoping for a wonderful 2019. Our hearts are broken for Frankie and Ernie. There Dad was very special and we are adding them and their Mom to our prayers.

Happy Happy New Year!! Thank you so much for leaving us a comment, I don't understand why your blog has TOTALLY stopped coming to me. I just tried to re-subscribe but it says I am subscribed but it isn't coming :(
Sending loving wishes for a happy, healthy, peaceful and fun 2019!!

We are very sorry about Sarah and Butch. Sending prayers. All we can do is keep having. It is good to see you know that.

It looks like you Doods had a fun New Year's Eve.

We're so sorry to hear about Frankie and Ernie's dad. Thanks for letting us know. We are crossing our paws for all their family. Our mom had heard about Miss Sarah too and we are sad for her family too.

Very sorry to learn of Frank & Ernie's dad passing. It's always hard but especially during the howlidays. We're sending them oodles of poodles thoughts and prayers of comfort.

Such a sad time.

I want to say Happy New Year... but with all that sadness, it can't really be happy.

I'm glad that the bear kept Stanley company while he partied into 2019. I hope that everyone finds some peace in this new year.

Three Pups and a Couple of Kitties said...

Such sad news. Keeping both families in my thoughts and prayers.

Charlee: "Such sad news about Sarah and about Frankie & Ernie's Dada."
Chaplin: "We lost way too many friends and family members in 2018.
Charlee: "I sure hope 2019 has something better in store for us."
Chaplin: "And if there's not, at least you guys have plenty of beer!"

Oh such sad news so early in the new year. Rest in Peace Sarah and Butch. Hugs to their families.

Oh my Boo! I just knows you got my kiss at the strike of 12, rights??! I see you still knows how to pawty, and took my tips on not letting your brudder let you drink and fetch! BRAVO!
I was so very sad to hears the news abouts Frankie and Ernies Pops. I am sendin' my loves and slobbery kisses their way. I thinks Butch can handle Madi's twerkin'....he saw F&E in their tighty whitey's and didn't flinch!
I'll be barkin' with you tonight my Boo, cause a big storm is comin' tomorrow nights and you knows how I don't likes to gets my FABulous furs wet! BOL
Kisses,
Your Fiance, the one with the FABulous furs, Ruby ♥♥♥
CHERRY BOMB FUREVERS!!!!!!!
pees: HEY STANLEY! Lookin' good mate!

So sad about F&E's dad and Miss Sarah.
Cam and Mags

Aww, sorry to hear about that. :( It's really hard to lose a loved one.