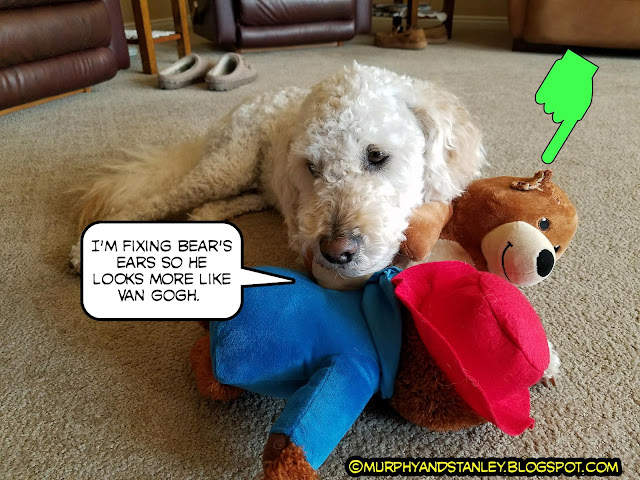 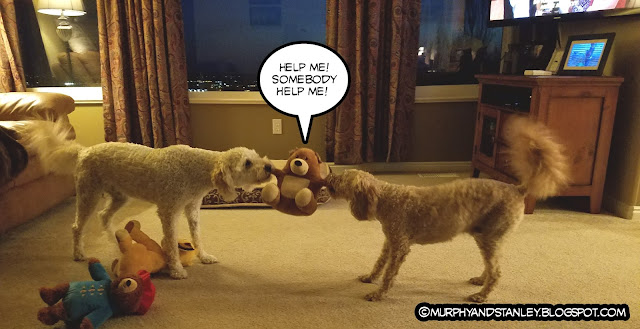 Bear is lucky to have you to help him look cool!

Is it wrong to find that last photo hilarious.
Sorry bear!

hahaha...uh I mean sorry Mr. Bear... you have to have a lot of BEAR-ableness huh?

Work on the eyeballs next. All our stuffies are blind
Snorts,
Lily & Edward

I like to go for noses myself but I like what you have done with the nibbled ear!

It was so nice of you to include Bear in your games!

Did you get the squeaker out yet???

So will this be the Bear that can paint with his feet?

I think the bear is in big trouble.

Poor Bear! Looks like the tug of war is a tie. Hope your snow melted~we have sunshine today.
Wags,
Noreen and Hunter

Dui disarmed (and diseared) his teddy, too!

A Van Gogh bear is a great idea. You have done tremendous work.

Your stuffies don't stand a chance with you two around.

I start with the ears too!
hugs
Mabel

Sometimes you have to do the dual torture rack to show those toys who is the boss or bosses!

Ears on bears are extraneous-this way you can sneak up on him. 😇