Today I went to see Dr. Eddy about my thingie.  Mom thought it might be a bit bigger (it's hard to measure) so she said we better have him look at it.  The other dogtur I saw in February was at the Air Force Base and they don't do serious stuff like thingie diagnosis so we went to see the highly skilled Dr. Eddy.  He knows all about thingies! 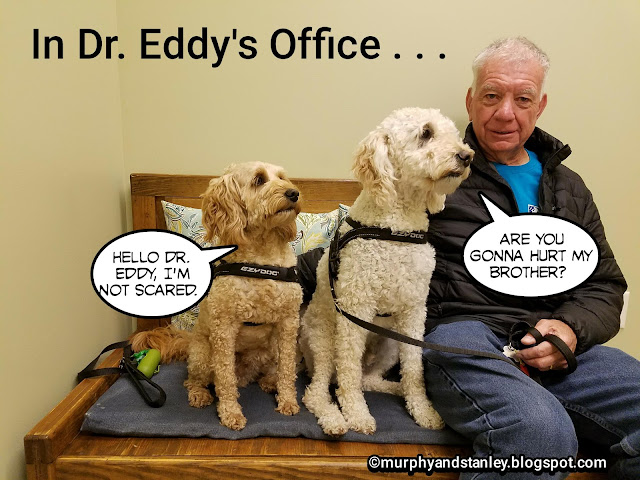 As you can see Stanley came for moral support.  However, it turned out Stanley was VERY nervous.  His bottom jaw was even quivering but he does NOT want Jessie to know about that.

Dr. Eddy was VERY impressed that I followed directions and rolled over so he could see my thingie. He thought he might have to wrestle me to see it but mom said I would follow directions so he can easily examine it and she was right.  I just rolled over and let him see it, even when he decided to do a biopsy.  Mom said it was obvious that me and Stanley were PSU graduates and she said she was proud I was such a good boy. 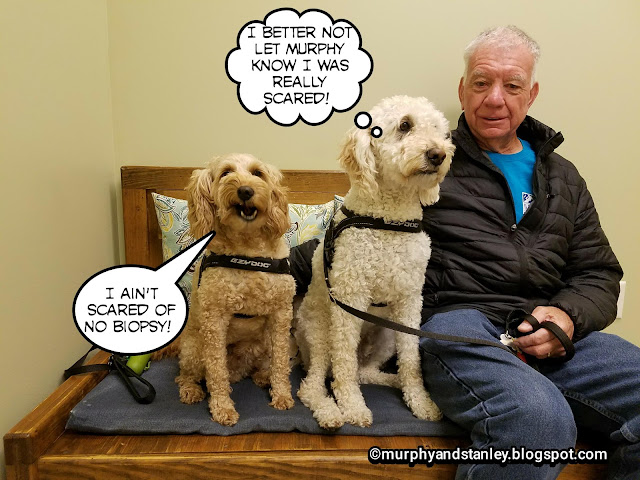 Dr. Eddy said I was the bravest boy ever!  Then he left the room to look at cells.  Stanley was afraid we were going to be put in a jail cell.  Then Dr. Eddy came back and started calling out BINGO.  He said B9!  Mom and dad were very happy.  Dr. Eddy said as long as my thingie stayed small (he said it was 5-7mm) it was OK to leave it alone.  Everyone at our house is really happy.

OMD, Stanley, you were SO brave AND sensitive with your brother!!! I'm so proud of you!! I love a man who's not afraid to show his sensitive side.

And yay Murphy for being brave and the B9 result too!!!

Glad the thingie was B9! How nice to have a brother who will go alone with you for moral support, especially if he was scared.

We're glad you had it checked out! You were so brave and good. Hope you get a treat. Love the B9 for the K9...bwahaahaa!

Ohhhhhhhhhhhhhhhh Murphy we are twerking like wild gals here in NC...
I'm so glad to hear Dr. Eddy has a degree in Thingie Diagnosis. It is probably more impawtant than having a Degree in Feline Chemistry, you know we are a mysterious species. OMCs I hope his Thingie needle was soft tipped.
Hugs and nose kisses and I WON'T TELL JESSIE THAT STANLEY WAS SHAKING IN HIS BOOTIES AND HIS LIP WAS QUIVERING.
Hugs madi your bfff

That's good news. Abby is like Barkley - LOVES to go to the Vet, probably because they give him more treats than I do.

Whew! I'm so glad it was nothing serious! Too much serious lately!

You were brave indeed. I do like Dr. Eddie. He's a good guy, even though I shave scared the poopies out of him once. hehehehhe. Glad all is well.
Blessings,
Buddy

You were so brave and we are very happy you got the results right away and even more happy it was B9. You are such a good dog. We are doing the dance of joy for you.

B9 is a great number, and we are so happy that Dr. Eddy called it out for you!!! We are doing a bit of a Siberian dance here for you. Lightning might not admit it, but he would have been very nervous too.

We're glad to hear your thingie was B9. That's great news.

What a very brave boy you are Murphy!! We are also glad your cells are B9!!
Smileys!
Arty, Jakey & Bilbo

Phew!!!! OMD, my STUD MUFFIN!!!! Lookie at you all brave and tall! You knows what, I gots 'thingies' all over me! and my vettie said the same thingie...all just fatcells! I gots like five of them, in all sizes! one of them goes up and down (that one is just fluid and stuffs..hehehe) Ma doesn't get freaked out anymores, she just has the vettie ASSpirate it to make sure it's a-okays! I'm glads your Dr. Eddy was able to do the same thing! Wooohooo!!! Nows, I hopes you gots lots of treaties and Stanley gots a doggie valium while he was there..hehehehe
Okays, now that we knows we BOTH gots 'thingies' on us, we are fursure suppose to be Boo's!
Okays, we'll bark more tonights...
Kisses,
Your Fiance, the one with the FABulous furs (with thingies) Ruby ♥♥
pees: I would have NEVER rolled overs and showed him MY thingie...just sayin'

WOW! What a brave guy! B9, very clever and glad that was the result!! Dante would probably of had a fit if a scary dogtur tried to look at his thingie...LoL We hope you got lotsa treats!!

Whew! We are very happy that you thingy is officially B9. That is the best news of the day. It is sweet that Stanley was scared for you ♥

Oh we here are happy too. In fact I am rolling on the floor happy.
(And we're sure Jessie will not realise how scared Stanley was...)
Toodle pip!
Bertie.

I'm so glad that you got good news... your dr. eddie is a super-vet... and no one ever lands in a jail cell... I'm sure... maybe the thingy when it has to go once, but we hope it will be well bee-hived and you can leave it alone...

Always good to win at Bingo and especially the B9-version! Congratulations.

Alasandra, The Cats and Dogs said...

We are so glad the thingy can be left alone and that it isn't serious. And you really are a good boy, it took Mom and 3 vet technicians to hold Fenris down, so they could shave his paw and treat his Acral Lick Granuloma.

We're so glad it was not anything bad. We cocker spaniels know all about lumps and bumps! The older we get, the more lumps and bumps we get. 99% of the time, they're benign. But it's good to get it checked out.

You were so brave! Dogturs scare me bad!

Wonderful news, Murphy!!! Please tell Stanley he is a great brother
for being supportive even though he was scared.
~ Belle for the rest of the pups and kitties.

Great news, Murphy! You are healthy and BRAVE!

Whew!! We are happy too!!! DakotasDen

Your soooo brave.. So glad it was B9

We are so glad your thingy is B9!

We are soo very glad you're thingy is B9. It's no fun going to the dogtors. Sadly I had to go see the dogtor this week 2. Maybe we can both skip a few months before we have to go again.

Molly and my Mom @The Fast and The Furriest