The Rest of the Pawty!

[Our earlier post was the debut of Bad Dog Agency.  If you didn't see it, make sure you go back to the one before this one.  Now, for the rest of the evening . . .]

After the smashing success of the band's debut, everyone took off so they could pawty some more.  The crowd was treating everyone like they were celebrities or something.  The girls were following Murphy all over the place since he was the only available guy in the band.  Murphy intentionally went to the pawty stag cuz he wanted to dance with all the pretty girls!  Ernie and Stanley were giving Murphy a hard time and teasing him about having groupies. 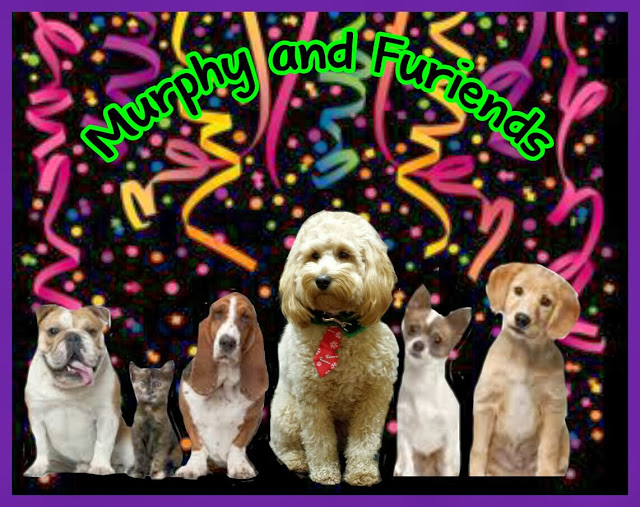 Everyone always thought of Murphy as being sort of quiet but now they were seeing a different part of him! 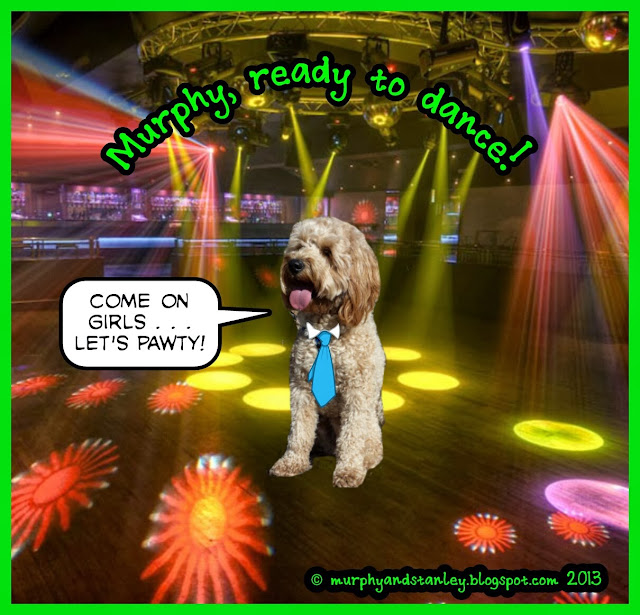 Meanwhile, since the crowd had moved on, Stanley and Taffy made their way back to the grand piano.  Stanley didn't know it at the time but he found out that Taffy had a lovely singing voice and she could play the piano!!!  Stanley was very coy when he suggested they sing a duet of the song "Puppy Love". 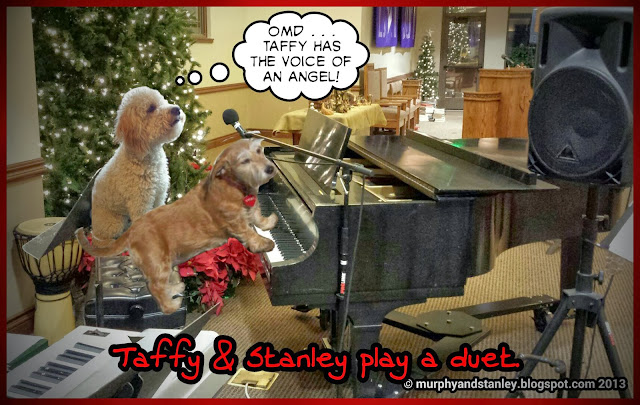 It has been no secret that Stanley has been crazy about Taffy for awhile now.  But he had never told her how he felt because he could never think of the right words.  So he decided New Year's Eve was the right time to tell her with a song.  Stanley took a deep breath and with his rich voice began to sing the words made famous by Etta James: "At last, my love has come along.  My lonely days are over and life is like a song . . ."  As Stanley sang to Taffy, she was totally spellbound.  After their tender moment, they decided to go check out the dance floor where they slow danced to Louie Armstrong's "What A Wonderful World". 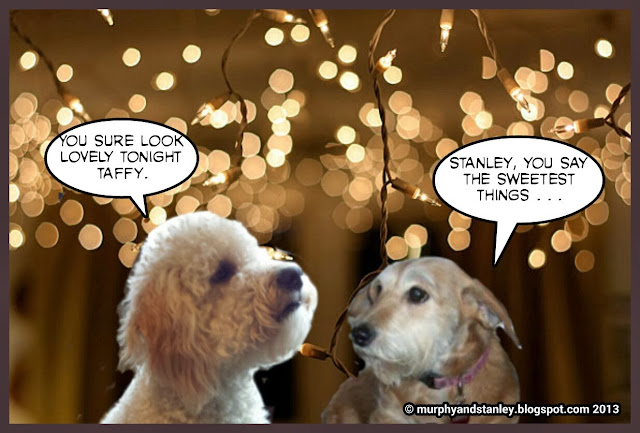 After a few more dances, they decided to take a break so they went back to their table. 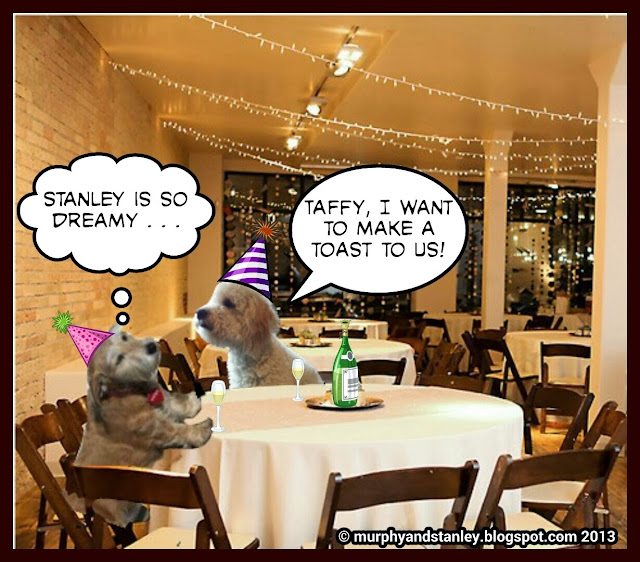 Taffy and Stanley had both looked forward to being together for New Year's Eve.  The whole evening was magical.  Stanley was a pawfect gentledood in every way. 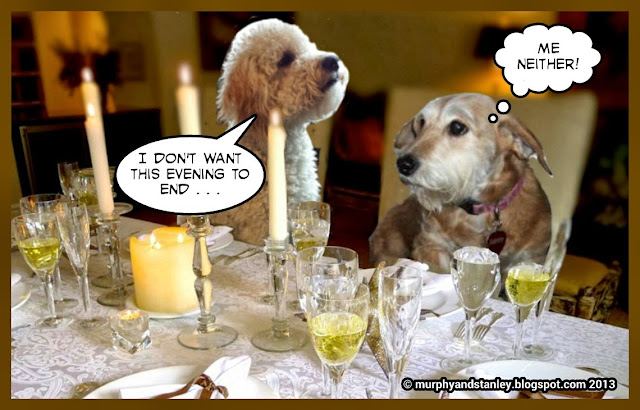 But Stanley knew the evening would have to end and they would be apart once more.  So he made sure they got official photos taken of the pawty (Sarge thought of EVERYTHING!) so they could remember this night forever. 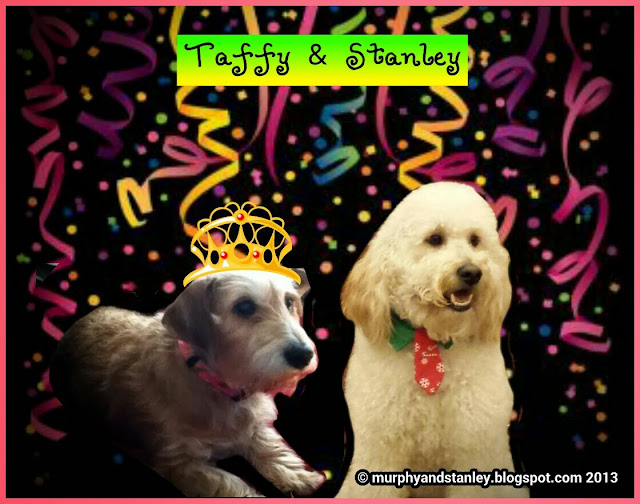 And as the clock struck midnight, all heads turned to see the sky light up. 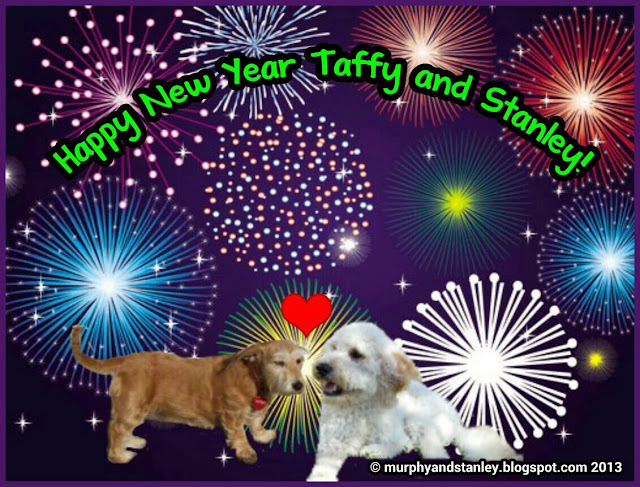 Happy New Year to all our furiends and friends. Be safe as you welcome the new year and we'll see you right back here in 2014!


Pee Ess - Please visit our POTP page as we have unfortunately added another of our furiends.
Posted by Murphy at 12:00 PM

Awwww, young love. Don't know how Stanley had any energy after that terrific band performance. Must be all those long walks.

Wow, you two are such a sweet couple! Looks like you made the best of all of the events and think your puppy-love is set to last and last. OMD Murphy, you're getting your own Fan Club going! The girls are star-struck fur sure and I think your dance card is overflowing. BOL Way to go keeping the ladies hopping. I'm so glad you all joined me for the big Bash! BDA is amazing and your dancing is really cool, doods!
Grr and Woof,
Sarge, Party Animal

How sweet. What a great night. Happy New Year! Lee and Phod and their Lady

Oh gosh, I guess I am too late ...Murphy and Taffy are about to sail off into the sunset. Must find another handsome doggie to dance with.

Looks like you guys are having a fab time.
Happy New Year! Hope 2014 is even bigger and better! xx

You guys are such ladies men! Hope you guys have a wonderful New Years Eve and can't wait to see you next year! :)
Your curly hair fur-iend,
Spencer

Happy New Year to you doods Murphy sure is the chick magnet and looks like true love for Stanley & Taffy
Here's a toast to a great 2014.
Mr Bailey, Hazel & Greta

You two love dogs only had eyes for each other. Why you didn't even see the old year end!
Happy New Year Stanley and Murphy. Thanks for being my friend this years.
Peace & Love
Sweet William The Scot ~ AKA Rockin Wilss

Oh my Doods, you certainly know how to show a girl a good time. Hunter can only dream about it. Hope your dreams all come true. Happy New Year from our hearts to yours.

STANLEY.... you and Taffy REALLY sing WELL together... and BUDDY your rendition of AT LAST send Shivers down MY spine... I think I even Dribbled a bit.. Hope Roxy doesn't notice.
OMD I saw MURPHY with like 87 girrrrrrls all around him.
I am kinda worried that there might be a FIGHT... THANK DAWGNESS Dr. Lassie and EMT Benji are close by... to tend to any EMERGENCY Injuries...
What a FABULOUS time you guyz are having... and TAFFY TOO, of course... Do you want to go get some more of Wyatt and Stanzie's Foods with Roxy and Me?

Wow a gal certainly has a good time with you Doods. No surprise with you handsome well mannered pups. Rock it boys. Have a terrific Tuesday.
Best wishes Molly

Such a beautiful couple!

OMD you have GOT to be KIDDING!! A Record pawducer heard US??? And wants to talk Recording Deal??????????????? OMD OMD THAT is grrrrreat. Roxy and I heard that there is a FAN CLUB forming and that they want TeeShirts and stuffs... OMD OMD It HAS to be beclaws of Roxy's and YOUR songs... EVERYBUDDY LOVES THEM BOTH!!!
I am so EXCITED that I have Dribbled Everywhere. I just can't hold it... Like with your song... THIS is gonna be a GRRRRREAT year fur the BDA

Aw, Taffy and Stanley are too much - the perfect couple!!!

Happy New Year to all of you!

Happy New Year!
I am having a good time at your party!
love
tweedles

Stanley, you are a smooth operator. Will there be wedding bells in 2014?
No pressure, just askin'

aw, Stanley and Taffy make a cute puppy couple (pouple?) say, can we be band groupies too?

You two make such a cute couple! Hey Murphy do you have any dances left? I'm ready to get moving.

Hey Doods!
Wow, I just had to stop back by and tell you that I'm a huge BDA fan! Thanks so much for all of your hard to put the band together and I can tell you that BDA TOTALLY ROCKED THE HOUSE! I'm so glad you pawticipated in the bash and I can't wait for your next gig. Please be sure you swing by the bar asap to get your glasses of champagne....it's almost time for the big midnight countdown and toast!
Grr and Woof,
Sarge, Party Animal

BTW: Sam his his red wagon all powered up now and ready for trips to get everyone home safely in case you're looking for a ride! :)

HAPPY NEW YEAR BOYS !!!!! Looks like your having a great time.
Wags,
Ranger

Happy New Year!! Looks like you guys are having a great time! Xo Chloe and LadyBug

Stopping back to say how sorry we are to hear about our dear friend, Sugar! We are going over right away with prayers. Thank you for telling us.

Hope you have a pawesome New Year, Doods :)
Stewey

Stanley you and Taffy are absolutely adorable.
Hugs madi your bfff

OMD, what a fabulous time us girls had last night. thanks for the dreamy dances Murphy.
Wow, Taffy and Stanley really looked fantastic together.

Oh, Stanley, I will be dreaming of this night for the rest of the year! You are the pawfect date! I can't wait to see you again......that is, if you want to see me again :0) Murph, I saw you with a few special ladies. Maybe a girlfuriend is in store for you in 2014!